Items related to Aimee Semple McPherson and the Making of Modern Pentecostali...

Aimee Semple McPherson and the Making of Modern Pentecostalism, 1890-1926 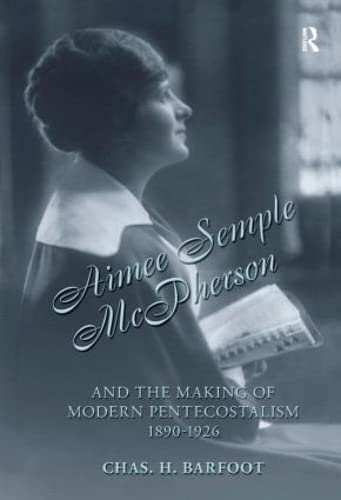 Pentecostalism was born at the turn of the twentieth century in a "tumble-down shack" in a rundown semi-industrial area of Los Angeles composed of a tombstone shop, saloons, livery stables and railroad freight yards. One hundred years later Pentecostalism has not only proven to be the most dynamic representative of Christian faith in the past century, but a transnational religious phenomenon as well. In a global context Pentecostalism has attained a membership of 500 million growing at the rate of 20 million new members a year. Aimee Semple McPherson, born on a Canadian farm, was Pentecostalism's first celebrity, its "female Billy Sunday". Arriving in Southern California with her mother, two children and $100.00 in 1920, "Sister Aimee", as she was fondly known, quickly achieved the height of her fame. In 1926, by age 35, "Sister Aimee" would pastor "America's largest 'class A' church", perhaps becoming the country's first mega church pastor. In Los Angeles she quickly became a folk hero and civic institution. Hollywood discovered her when she brilliantly united the sacred with the profane. Anthony Quinn would play in the Temple band and Aimee would baptize Marilyn Monroe, council Jean Harlow and become friends with Charlie Chaplain, Douglas Fairbanks and Mary Pickford. Based on the biographer's first time access to internal church documents and cooperation of Aimee's family and friends, this major biography offers a sympathetic appraisal of her rise to fame, revivals in major cities and influence on American religion and culture in the Jazz Age. The biographer takes the reader behind the scenes of Aimee's fame to the early days of her harsh apprenticeship in revival tents, failed marriages and poverty. Barfoot recreates the career of this "called" and driven woman through oral history, church documents and by a creative use of new source material. Written with warmth and often as dramatic as Aimee, herself, the author successfully captures not only what made Aimee famous but also what transformed Pentecostalism from its meager Azusa Street mission beginnings into a transnational, global religion.

Chas. H. Barfoot is a Lecturer in Religious Studies at Arizona State University.

"Blending decades of Aimee's research with his own formation among Pentecostals, religious historian Charles Barfoot has crafted an insightful and informative portrait of burgeoning Pentecostalism draped about one of its most colorful yet seriously underrrated figures." --Russ Spittler, Fuller Theological Seminary

"Aimee Semple McPherson towers over the religious and cultural history of America in the early years of the twentieth century. And now since Pentecostalism after World War II has become the fastest growing segment of Christianity, her influence is even more significant than it was a half century ago. Charles Barfoot's comprehensive biography will now become the book of record on her controversial and legendary life." --Harvey Cox, Harvard University

"This is an extraordinary story of an extraordinary woman. Extraordinary not only in her burning desire to evangelize the unchurched population of Los Angeles but also in her skill in using all the techniques of the Hollywood film industry to this purpose. It would have been easy for the author to use the rich material at his disposal for either a devastating scandal story or a hagiographic romance, as others have done before. Aimee's biography offers all the ingredients of a Hollywood thriller. The author avoids both temptations. Instead, he successfully tries to understand this woman in her ambiguity." --Professor Dr. Walter J. Hollenweger, Krattigen, Switzerland

1. Aimee Semple McPherson and the Making of Modern Pentecostalism, 1890-1926

3. Aimee Semple McPherson and the Making of Modern Pentecostalism, 1890-1926

4. Aimee Semple McPherson and the Making of Modern Pentecostalism, 1890-1926

6. Aimee Semple McPherson And the Making of Modern Pentecostalism 1890-1926