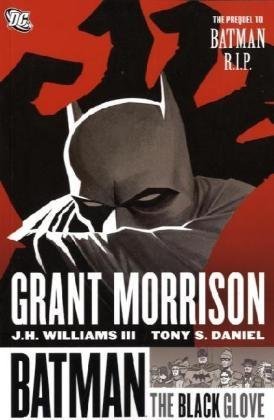 Gotham City is plagued with crime and corruption in places high and low, but one man has taken a stand against evil in all its forms: the dark avenger known as Batman. Now, the Dark Knight finds himself called to a mysterious island as the League of Batmen - heroes from around the world, all inspired by Batman - hold an extraordinary meeting...that ends in murder! Can the World's Greatest Detective solve the mystery of the Black Glove? Plus, Batman revisits his past - and his hunt for his parents' killer! Bestselling, acclaimed writer Grant Morrison ("Final Crisis") and award-winning artists JH Williams III ("Promethea") and Tony Daniel ("Detective Comics") present the last word in "Ten Little Indians" - style murder mysteries - with a Dark Knight twist!

This Batman collection is, unfortunately, bifurcated. The first half cheekily updates the 1950s Club of Heroes, a motley group of global counterparts of Batman who assemble, with the Caped Crusader, on a secluded Caribbean island and face an old-dark-house murder mystery. Morrison’s clever script is greatly abetted by J. H. Williams’ gorgeous art and imaginative storytelling. In the prosaically illustrated rest of the book, Batman has a near-death experience and a hallucinogenic dream populated by figures from his past. The end of this sequence is a cliffhanger lead-in to the “Batman R.I.P.” story line, for which fans have been relentlessly primed. --Gordon Flagg

Book Description Titan Books Ltd, 2009. Paperback. Condition: Good. Good condition is defined as: a copy that has been read but remains in clean condition. All of the pages are intact and the cover is intact and the spine may show signs of wear. The book may have minor markings which are not specifically mentioned. Most items will be dispatched the same or the next working day. Seller Inventory # wbb0013377848