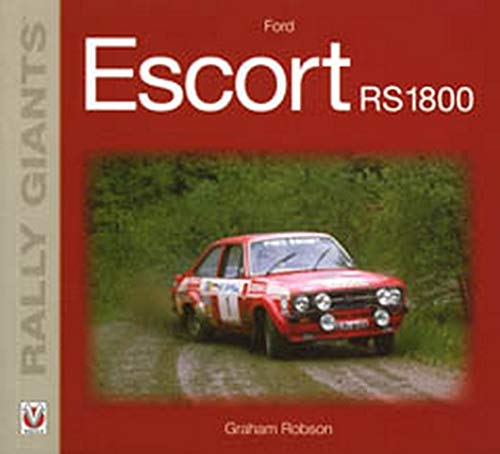 Escort RS1800 (Escort Mk II) : This is a Rally Giant because it was consistently the fastest, the most successful and the most versatile car in the second half of the 1970s. Developed from the Mk I, it was a conventional front engine/rear drive machine, which rallied with 2-litre engines of up to 270bhp. Rally successes were legendary - British (RAC), Safari, Acropolis, Finland (1000 Lakes), Sweden, Portugal, Canada - and  more and more. They won 17 World Rallies between 1975 and 1981. RS1800s won the World Makes Championship in 1979, and were always close to victory, and always competitive. Escort drivers like Bjorn Waldegard (1979) and Ari Vatanen (1981) won the World Drivers' Championships. Over the years hundreds - and this is no exaggeration - of RS1800s were built for motor sport, and were the ideal car for almost any condition in the world because they were very powerful, but simple and rugged. The RS1800 was also the layout template which was copied by other manufacturers - for cars like the Talbot Sunbeam-Lotus, the Vauxhall Chevette HSR and the Nissan GTs of the late 1970s/early 1980s, which were really all Escort 'clones'. Ford claim, and they may be right, that RS1800s have won more rallies, at World, International and National level than any other car in the world.

Graham Robson possesses a world-wide reputation as a motoring historian, and has been close to the sport of rallying for many years. Not only as a competitor, team manager, organiser, reporter, commentator and observer, but above all as an enthusiastic historian, in more than forty years he has never lost touch with the sport. His experience of rallying is worldwide. Not only has he competed in many British and European events, but reported on marathons in South America, and acted as a travelling controller in the legendary London-Mexico World Cup rally. As a recognized authority on many aspects of classic cars and motoring of that period, he is the most prolific of all authors, with more than 130 published books to his credit. Over the years he has owned, driven, described and competed in many of the cars featured in this landmark Rally Giants series, and his insight into their merits is unmatched.

The latest two softbacks from Veloce are part of a series by Robson that will cover 16 of the most important rally cars of the last half-century. Each runs to 120-odd pages and boasts straightforwardly written, authoritative text and a large number of colour and b&w pictures. Besides the chronological history there are interesting sidebar digressions - did you know Roger Clark's 'Cossack' Escort had eight different liveries in ten events?!

When the Mk2 Escort succeeded the highly successful Mk1, it hardly seemed possible that it would go on to become even more successful on the rally scene around the globe.  Graham Robson's book on the RS1800, another in the 'Rally Giants' series, follows the highly-successful and reader-friendly format of the rest of the series. The book contains over 140 photographs and charts the development, describes all of the key people involved, including drivers, and charts the rallying success from 1975 to 1981.  It was interesting that Robson makes the point that POO 505R is always known as Roger Clark's 'Cossack car'... when it only appeared in that famous color scheme on one event – the 1976 RAC ... and the complicated tale of STW 201R (you have to read about that yourself).

A comprehensive guide to the MkII Ford Escort RS1800 that would go onto become so successful. Starting with the team individual engineering and technical information of the car, it is written in a understandable manner, giving details of the initial plans and improvements made. The second half of the book is completely dedicated to the competition years, with great images of the MkII in action with some of the great drivers of the past. This is a nice size book with enough detail to keep you reading and a good guide to the car that had a big impact in rallying.

RALLYING TO THE CAUSE
Ford Escort RS1800 and Audi Quattro are the latest in Veloce's 'Rally Giants' paperback series. Both are by Graham Robson and at $29.95 are packed with pictures and quotes. Other titles are Peugeot 205 T16 and WRC Escorts.


The very productive Robson continues his enjoyable 'Rally Giants' series with these latest offerings on two of the iconic rally cars from the last 30 years. Both titles are in the same, now familiar format: 128-page soft cover books with plenty of fine photos. But the cars themselves certainly are very different: it's easy to forget the impact the quattro had when it was introduced, while the Escort started off looking like a pretty standard family car! The two models didn't quite coincide on the world rally scene as the Escort's days at the top ran from 1975-'81, while the quattro was one of the top dogs from 1981-'86. But they won rallies and titles aplenty, and it's fascinating to follow their rallying exploits. Both books chart the development of the cars; their drivers, from Clark and Vatanen to Mikkola and Blomqvist, plus all the others behind their many successes; the competition they faced, and lovely little snippets like registration numbers and the occasional blind alley.
-

Speedscene, October 2008
The magazine of the Hillclimb and Sprint Association

The industrious Graham Robson's book on the Peugeot 205 T16 was reviewed in Speedscene 146 and here are two more in the on-going series of Veloce's 'Rally Giants' series. Equally informative, as one would expect from the author with such a worldwide reputation as a motoring historian– fueled by his parallel career as a competitor, team manager, organizer, reporter and commentator (not to mention National Motor Club Quiz chairman, as this reviewer remembers, having been on the HSA's losing semi-final team in a Ford-sponsored series some years ago!) – these books cover the development and competition careers of two iconic rallying legends of the seventies and eighties. The Cosworth 16-valve BD engined Mk2 Escorts were arguably the most consistently versatile and successful rally car of all in the second half of the seventies, while the Audi Quattro was the first 300bhp plus World Rally car and the first to combine 4WD with a turbocharged engine, which brought new standards to the sport in the early years of the eighties. Their histories have been documented before, but Robson's compact and informative series or Veloce provides an ideal reference.

"Like the Audi Quattro book of the same series, if you're a fan of this car you really should buy this book. There's all the information you'll ever need on the Ford team, the cars and driver's that's easy to follow and is well written." – tiscali.co.uk

Book Description Veloce Publishing, 2008. Condition: Good. Shows some signs of wear, and may have some markings on the inside. Seller Inventory # GRP116545230

Book Description Veloce, 2008. Condition: Good. A+ Customer service! Satisfaction Guaranteed! Book is in Used-Good condition. Pages and cover are clean and intact. Used items may not include supplementary materials such as CDs or access codes. May show signs of minor shelf wear and contain limited notes and highlighting. Seller Inventory # 1845841409-2-4