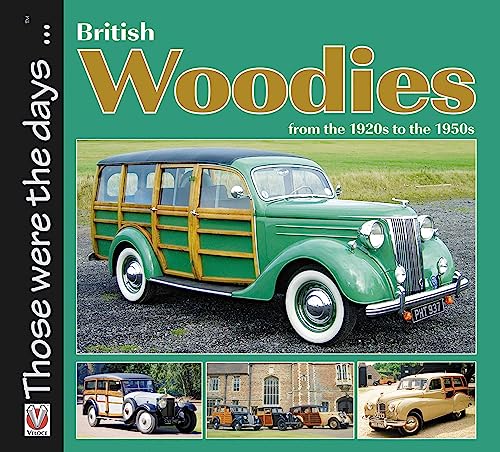 In the 1920s, 30s and 40s, wooden-bodied shooting brakes, estate cars and station wagons were commercial vehicles built in Britain mostly for utilitarian roles. They were built in relative small numbers, often by small lesser-known commercial bodybuilding firms and required high levels of maintenance to ensure anything resembling a long life. Every chassis from Alvis, Austin and Bentley to Standard, Vauxhall and Wolseley, were built as Woodies at some stage and reached their peak of popularity in the immediate post-war years when steel was in short supply and the majority of new cars were being built for export. Some vehicle manufacturers sold wooden-bodied utilities under their own name, but most were built in small workshops under contract to vehicle dealerships or selling direct to the general public. However, labor intensive constriction, high maintenance requirements and the introduction of the unitary chassis by Britain’s car makers all contributed to the eventual demise of the British Woodie. Today, there’s resurgence in the interest in British Woodies across the world with an increasing number of cars being restored and cherished. The work of hundreds of small coachbuilder firms is highlighted and illustrated with 100 rare and previously unpublished photos. The British Woodie is undoubtedly a thing of beauty and this book is a tribute to the skills of the coachbuilder who built these amazing wooden wonders.

Colin Peck started his career in road transport in the mid-1960s and held a number of management positions in such companies as Thorn Electrical and Pickfords Heavy Haulage. His experience at such companies led him to a successful career in road transport journalism, writing for trucking magazines from Australia to America, Canada to South Africa. During the 1980s he was European Editor of the leading US-based trucking magazines, Heavy Duty Trucking and Transportation Engineer. He subsequently entered the public relations industry, and has handled the UK PR strategies for such organizations as BRS and Ryder.

A really interesting little softback about a previously unexplored subject, this book contains some great archive shots– especially of WW2 utilities, and of shooting brakes under construction. Spanning the 1920s-1950s, it outlines the surprisingly large number of body builders involved, and is brightened with color photos of surviving cars.


As club chairman of the Woodie Car Club, Colin Peck is the ideal author for this fascinating glimpse into British part-wood estate cars. The early half of the 20th century was the golden age, and Woodies weird and wonderful are crammed into this book, from humble Austins and Fords to a Jaguar XK140 and Rolls-Royces. The Second World War saw many exotic saloons turned into wooden-bodied ambulances - there's something very appealing about a sporting Bentley Woodie. There are also a handful of rare assembly line photos giving a fascinating insight into the handbuilt production of these cars. By the late 1950s, with the exception of the Morris Minor Traveller, the Woodie had all but died out. The last chapter looks at a few daunting restoration projects that will almost certainly bring tears to your eyes. Yes, it's specialist subject matter, but one that will appeal.
-

Who better to write a book on British-built woodies than the founder of the Woodie Car Club? The latest in Veloce's square paperback 'Those were the days ...' series, this 90-page edition is packed with insight and photos. Pre-war designs are covered briefly, the main focus being 1946-54, the 'golden years of the shooting brake' when woodies were exempt from purchase tax. Peck relates how Austin was first to launch a factory-approved woodie - built by Papworth Industries - soon followed by Lea-Francis. Chapters review wartime woodies, chassis builders and specialist body firms; illustrations are a mix of period shots of long-lost cars and a gallery of survivors including Peck's Austin A70 Hampshire Countryman. Rarest of all is a one-off Invicta Black Prince with a bizarre woodie body by Associated Coachcraft.

In this book, another in Veloce's 'Those Were The Days' series, Colin Peck takes an affectionate look at what he calls British Woodies – although somehow the term remind me more of California than of Lea-Francis. After an overview of their birth as a utility vehicle for country estates, Peck looks at the use of woodies in WWII (when they were sometimes cut down for desert welfare); the attraction of their tax-exempt status; and their slow decline because of the complexities of their manufacture, the need for frequent maintenance, and the rise of the unitary body structures. There are separate chapter on marques that had some woody bodies made on them (Allard, Morris) and body builders, many of which weren't traditionally associated with the motor trade.   Peck doesn't claim to have written a definitive history, but it's still an interesting read. You're just as likely to buy the book for the photos anyway. There are about 100 of them, a mix of contemporary photos and shots of restored woodies. You see Austin A70 Countrymen on the assembly line at Papworths, and other cars that are much more of a one-off like the unique Invicta Black Prince. Most of the cars shown are pretty square-sided and traditional, like a Bentley R-type and a Morris Y, but there are some fascinating variations such as the Allard P2 Safari, and a fastback woody body on Riley RM.  This book is reasonably priced, and well worth a look.

Book Description 2008. Paperback. Condition: New. Paperback. In the 1920s, 30s and 40s, wooden-bodied shooting brakes, estate cars and station wagons were commercial vehicles built in Britain mostly for utilitarian roles. They were built in relative.Shipping may be from multiple locations in the US or from the UK, depending on stock availability. 96 pages. 0.295. Seller Inventory # 9781845841690

Book Description Veloce Publishing, Dorchester, 2008. Paperback. Condition: New. 1st Edition. British commercial manufacturers played a prime role in boosting Britain's economy during the 1960s, especially as many vehicles were exported worldwide. British lorries were, therefore, considered as being the workhorses of the world, performing a wide range of duties from heavy haulage to general goods delivery. This highly visual study of British lorries of the 1960s captures in 120 illustrations this often understated but very necessary work, which was undertaken day and night, 365 days a year. The images, many contemporary colour and black and white, include some delightful publicity items in addition to covering the heritage and preservation scenes. The comprehensive text reveals much about the marques that were everyday names, along with information about Britain's road haulage and commercial vehicle industries. Malcolm Bobbitt is the author of some thirty automotive books and is a member of the Guild of Motoring Writers and the Society of Automotive Historians. This book will rekindle many memories and serve as a reminder of the important role British commercial vehicles played during the 1960s. Size: 12mo - over 6ľ" - 7ľ" tall. Seller Inventory # 158200

Book Description 2008. Paperback. Condition: New. Paperback. In the 1920s, 30s and 40s, wooden-bodied shooting brakes, estate cars and station wagons were commercial vehicles built in Britain mostly for utilitarian roles. They were buil.Shipping may be from our Sydney, NSW warehouse or from our UK or US warehouse, depending on stock availability. 96 pages. 0.295. Seller Inventory # 9781845841690