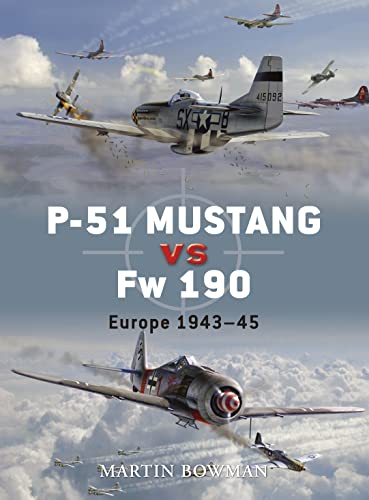 Discover the history of a classic duel as the finest American and German pilots are pitted against each other in the war-torn skies over Europe, in two of the most advanced fighter planes of the age, the P-51 and the Fw 190.

This exciting first book in a brand new, innovative series describes the design and development of these rivals and analyzes the strengths and weaknesses of each fighter through an examination of the key elements of airframe, engine, armament and flying characteristics. Also explored is the training the combatants received prior to tours of duty, providing an insight into the lives of the pilots as they tested both themselves and their planes in the deadly art of combat. Specially commissioned cockpit digital artwork allows the reader to relive the thrill and terror of a dogfight as these two evenly matched opponents battled for supremacy in the skies above Europe.

Martin Bowman has also written more than a dozen titles on the "Mighty Eighth" over the past 20 years including three highly-successful volumes in Osprey's Combat Aircraft series. Having interviewed many veterans over the years, he is the perfect author to describe the experiences of both Axis and Allied pilots. The author lives in Norwich, UK.

“The interviews with pilots really make this book worthwhile as you get to feel how going into combat must have felt like which you wouldn't get with more technical minded manuals. Personally I thought it was a very interesting read, with first hand accounts from test pilots and combatants on how each aircraft flew in each chapter.” ―Andy Brazier, Aeroscale (October 2007)

“P-51 Mustang vs. FW 190 Europe 1943-45 by Martin Bowman tells of the history of a classic duel as American and German pilots fought each other over Europe, offering the first in a new series to describe the design and deployment of these fighters. Any collection strong in military aircraft history will welcome the specifics on combat training, strengths and weaknesses of different fighters, and key elements of plane design.” ―The Bookwatch (February 2008)

“Overall a fascinating book that looks at two of the major combatants of WWII. I'm sure there will be others in the series and I look forward to them with great anticipation. A book I can recommend to you without reservation.” ―Scott Van Aken, modelingmadness.com (September 2007)

“Duel is the name of a new imprint from this legendary military history house... The key aims of this series are: to provide detailed information drawn from first-hand accounts and describe what it was like to be in combat, with the emphasis on the drama of being in the frontline of war; to explore the difference between the theoretical expectations of war and how things play out in reality; to explain the technical detail and developmental history of each weapon and combine it with the personal histories of the warriors who used them.” ―Flying Models (March 2008)

Shipping: US$ 11.66
From United Kingdom to U.S.A.
Destination, rates & speeds