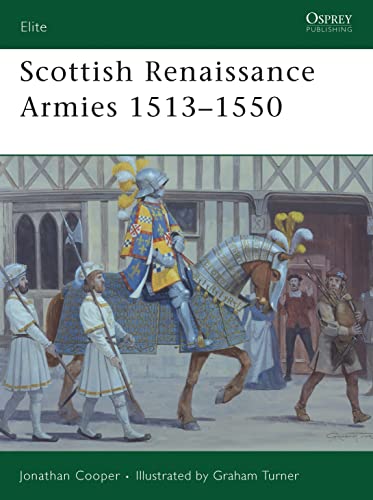 This book details the armies of what is known as "the Rough Wooing" - the most active period of Scottish warfare, which saw conflicts against both the English Tudor monarchs and notable internal struggles between the Stuart kings and their unruly lords in the Marches and highlands. Militarily, this covers an important transition period, which saw the change from medieval to Renaissance armies, with the spread of firearms and cannon, the involvement of various foreign mercenaries and tactics ranging from lightning cavalry raids to pitched battles and sieges, as well as early instances of the classic Highland Clan charge. The author analyzes these changes in the context of the ongoing conflict as well as examining the colorful costumes, armor and heraldry worn during the period, a diverse mix of late medieval, Elizabethan and Highland clothing and armor.

The major battles are also discussed and described, such as Flodden Field (1513) and Linlithgow Bridge (1526), including engagements between the armies of rival lords, such as Douglas and Lennox, which could involve up to 10,000 men. Ultimately, this was a time of great success for the Scots. By the fall of Lauder in 1550 the English had lost every fortress north of the border. Scotland's independence was secure and 50 years later King James VI of Scotland became the first Stuart king of England.

Jonathan Cooper is the author of the book The Heart and the Rose on the battle of Linlithgow, 1526 and is a leading researcher in this period of Scottish history. The author lives in Scotland.

“The early sixteenth century was a time of important military changes, particularly in the use of firearms and infantry tactics. This 64-page paperback reveals the organization, arms, equipment and tactics of Scottish armies with stunning original full-color illustrations, photos, drawings and period artwork. A must for anyone interested in 'The Rough Wooing,' the most active period of Scottish warfare and significant battlefield victories.” ―Renaissance News (February 2009)

“Jonathan Cooper's Scottish Renaissance ARmies, 1513-1550 describes and illustrates the Scottish armies of the 16th century, and is a pick for any specialty collection focusing on this region and era. It details the organization, dress and tactics of these armies and comes with period images and color plates throughout.” ―The Bookwatch (February 2009)