Walsh, Dan These Are the Days That Must Happen to You

These Are the Days That Must Happen to You 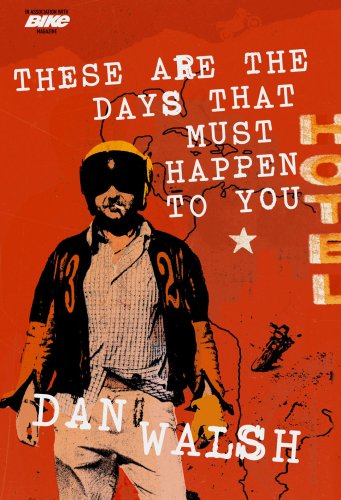 'Riding a bike removes the need for clutter, toys, rubbish that other men have to take on holiday. If I want adrenaline, I'll rush a giddy overtake, not rent a jet ski'. The world through the eyes of Dan Walsh is never less than Technicolor, and always uninhibited, rebellious and on the edge. Not since the days of "Jupiter's Travels" has one man embarked on such an angry, narcotic-fuelled bike trek around the world. 'For me, Chile will always be South America's supermodel sister - very beautiful but too long, too skinny, and too expensive to ride, and despite the groovy exterior, unpleasantly right-wing underneath'. Dan has travelled the length and breadth of the world on his BMW F650 GS Dakar. Along the way he's visited Buenos Aires, where 'revolutionary' means the angry poor invading the presidential palace, not a really small phone that's also a camera. He's been mistaken for a bum in New York, bashed by deadly tequila in Mexico, contracted typhoid in a dilapidated Bolivian hotel, and visited The Most Beautiful Road in the World in Peru. 'I get my bum pinched by a tranny, my pocket picked by a grifter and get a gun pulled on me by a one-eyed, one-armed midget who's upset cause I winked at him. These are the days that must happen to you'. Soaked in adrenaline and coruscatingly funny, Dan Walsh is the rightful heir to Ted Simon as the pre-eminent biker-rebel of our generation.

In 2005 bike journalist Dan Walsh departed Peterborough on a 650 BMW and headed for South America to become a biking drifter, pilgrim, and latter-day heir to Ted Simon. His Bike magazine columns about his travel experiences - lyrical, edgy, fraught with danger, despair and surreal highs and lows - have earned him a vast cult following and he has been labelled as "the saviour of motorcycle writing". Dan still contributes to Bike magazine and is still out on the road. This is his first book.

1. These Are the Days that Must Happen to You

Book Description Century 04/06/2009, 2009. Paperback. Condition: Very Good. Shipped within 24 hours from our UK warehouse. Clean, undamaged book with no damage to pages and minimal wear to the cover. Spine still tight, in very good condition. Remember if you are not happy, you are covered by our 100% money back guarantee. Seller Inventory # 6545-9781846053115

2. These are the Days That Must Happen to You

3. These Are the Days that Must Happen to You

Book Description -. Paperback. Condition: Very Good. These Are the Days that Must Happen to You This book is in very good condition and will be shipped within 24 hours of ordering. The cover may have some limited signs of wear but the pages are clean, intact and the spine remains undamaged. This book has clearly been well maintained and looked after thus far. Money back guarantee if you are not satisfied. See all our books here, order more than 1 book and get discounted shipping. Seller Inventory # 7719-9781846053115

4. These Are the Days that Must Happen to You

Book Description Century, 2009. Paperback. Condition: Used; Good. **Simply Brit** Shipped with Premium postal service within 24 hours from the UK with impressive delivery time. We have dispatched from our book depository; items of good condition to over ten million satisfied customers worldwide. We are committed to providing you with reliable and efficient service at all times. Seller Inventory # 1049603