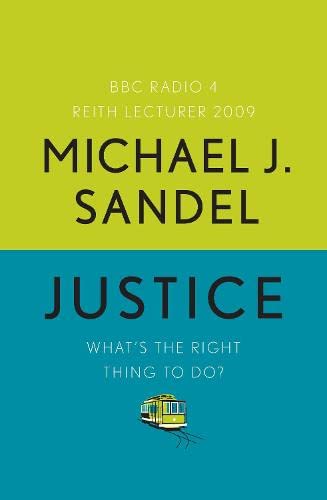 “For Michael Sandel, justice is not a spectator sport,” The Nation’s reviewer of Justice remarked. In his acclaimed book—based on his legendary Harvard course—Sandel offers a rare education in thinking through the complicated issues and controversies we face in public life today. It has emerged as a most lucid and engaging guide for those who yearn for a more robust and thoughtful public discourse. “In terms we can all understand,” wrote Jonathan Rauch in The New York Times, Justice “confronts us with the concepts that lurk . . . beneath our conflicts.”

Affirmative action, same-sex marriage, physician-assisted suicide, abortion, national service, the moral limits of markets—Sandel relates the big questions of political philosophy to the most vexing issues of the day, and shows how a surer grasp of philosophy can help us make sense of politics, morality, and our own convictions as well. Justice is lively, thought-provoking, and wise—an essential new addition to the small shelf of books that speak convincingly to the hard questions of our civic life.

Michael J. Sandel is the Anne T. and Robert M. Bass Professor of Government at Harvard University, where he has taught since 1980, and the author of many books. He lives in Brookline, Massachusetts.

Book Description Penguin Books, Limited, 2009. Condition: Good. Ships from the UK. Former Library book. Shows some signs of wear, and may have some markings on the inside. Seller Inventory # 14680650-6

Shipping: US$ 5.64
From United Kingdom to U.S.A.
Destination, rates & speeds

2. Justice: Whats the Right Thing to Do?

Book Description Allen Lane, 2009. Paperback. Condition: Used; Good. Dispatched, from the UK, within 48 hours of ordering. This book is in good condition but will show signs of previous ownership. Please expect some creasing to the spine and/or minor damage to the cover. Inscription on the first page, typically just a name but may include a dedication or a brief personal message. Seller Inventory # CHL6624157

Shipping: US$ 7.42
From United Kingdom to U.S.A.
Destination, rates & speeds

3. Justice: What's the Right Thing to Do?

Book Description Allen Lane, 2009. Condition: Good. This is an ex-library book and may have the usual library/used-book markings inside.This book has soft covers. In good all round condition. Please note the Image in this listing is a stock photo and may not match the covers of the actual item,500grams, ISBN:9781846142130. Seller Inventory # 8288694

4. Justice: What's the Right Thing to Do?

Book Description Paperback. Condition: Very Good. The book has been read, but is in excellent condition. Pages are intact and not marred by notes or highlighting. The spine remains undamaged. Seller Inventory # GOR001647922

5. Justice: What's the Right Thing to Do?

6. Justice: Whats the Right Thing to Do?