Items related to The Black Swan: The Impact of the Highly Improbable...

The Black Swan: The Impact of the Highly Improbable by Taleb, Nassim Nicholas (2011) Hardcover 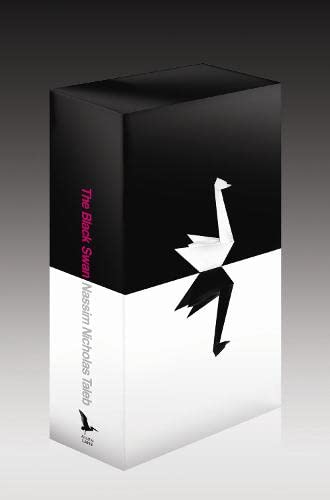 This is a slipcased hardback edition of Nassim Nicholas Taleb`s bestselling masterpiece, with the original first Penguin edition artwork. What have the invention of the wheel, Pompeii, the Wall Street Crash, Harry Potter and the internet got in common? Why are all forecasters con-artists? What can Catherine the Great`s lovers tell us about probability? Why should you never run for a train or read a newspaper? This book is all about Black Swans: the random events that underlie our lives, from bestsellers to world disasters. Their impact is huge; they`re impossible to predict; yet after they happen we always try to rationalize them. A rallying cry to ignore the `experts`, "The Black Swan" shows us how to stop trying to predict everything - and take advantage of uncertainty. REMEMBER NEW BOOKS MAKE GREAT AND AFFORDABLE GIFTS! WE ARE A SMALL FAMILY RUN BUSINESS WITH A LOVE FOR BOOKS AND CATS! (BENTLEY, OUR CAT, HELPS TOO, USUALLY SLEEPING BESIDE ME WHILE I WORK) OUR AIM IS TO PROVIDE YOU

Bestselling author Nassim Nicholas Taleb continues his exploration of randomness in his fascinating new book, The Black Swan, in which he examines the influence of highly improbable and unpredictable events that have massive impact. Engaging and enlightening, The Black Swan is a book that may change the way you think about the world, a book that Chris Anderson calls, "a delightful romp through history, economics, and the frailties of human nature." See Anderson's entire guest review below.

Chris Anderson is editor-in-chief of Wired magazine and the author of The Long Tail: Why the Future of Business Is Selling Less of More.

Four hundred years ago, Francis Bacon warned that our minds are wired to deceive us. "Beware the fallacies into which undisciplined thinkers most easily fall--they are the real distorting prisms of human nature." Chief among them: "Assuming more order than exists in chaotic nature." Now consider the typical stock market report: "Today investors bid shares down out of concern over Iranian oil production." Sigh. We're still doing it.

Our brains are wired for narrative, not statistical uncertainty. And so we tell ourselves simple stories to explain complex thing we don't--and, most importantly, can't--know. The truth is that we have no idea why stock markets go up or down on any given day, and whatever reason we give is sure to be grossly simplified, if not flat out wrong.

Nassim Nicholas Taleb first made this argument in Fooled by Randomness, an engaging look at the history and reasons for our predilection for self-deception when it comes to statistics. Now, in The Black Swan: the Impact of the Highly Improbable, he focuses on that most dismal of sciences, predicting the future. Forecasting is not just at the heart of Wall Street, but it’s something each of us does every time we make an insurance payment or strap on a seat belt.

The problem, Nassim explains, is that we place too much weight on the odds that past events will repeat (diligently trying to follow the path of the "millionaire next door," when unrepeatable chance is a better explanation). Instead, the really important events are rare and unpredictable. He calls them Black Swans, which is a reference to a 17th century philosophical thought experiment. In Europe all anyone had ever seen were white swans; indeed, "all swans are white" had long been used as the standard example of a scientific truth. So what was the chance of seeing a black one? Impossible to calculate, or at least they were until 1697, when explorers found Cygnus atratus in Australia.

Nassim argues that most of the really big events in our world are rare and unpredictable, and thus trying to extract generalizable stories to explain them may be emotionally satisfying, but it's practically useless. September 11th is one such example, and stock market crashes are another. Or, as he puts it, "History does not crawl, it jumps." Our assumptions grow out of the bell-curve predictability of what he calls "Mediocristan," while our world is really shaped by the wild powerlaw swings of "Extremistan."

In full disclosure, I'm a long admirer of Taleb's work and a few of my comments on drafts found their way into the book. I, too, look at the world through the powerlaw lens, and I too find that it reveals how many of our assumptions are wrong. But Taleb takes this to a new level with a delightful romp through history, economics, and the frailties of human nature. --Chris Anderson

Nassim Nicholas Taleb has devoted his life to problems of uncertainty, probability, and knowledge. He spent nearly two decades as a businessman and quantitative trader before becoming a full-time philosophical essayist and academic researcher in 2006. Although he spends most of his time in the intense seclusion of his study, or as a flâneur meditating in cafés, he is currently Distinguished Professor of Risk Engineering at New York University’s Polytechnic Institute. His main subject matter is “decision making under opacity”—that is, a map and a protocol on how we should live in a world we don’t understand.

Taleb’s books have been published in thirty-three languages.
From the Hardcover edition.

1. The Black Swan: The Impact of the Highly Improbable

Book Description Allen Lane, 2011. Hardcover. Condition: Good. Good condition is defined as: a copy that has been read but remains in clean condition. All of the pages are intact and the cover is intact and the spine may show signs of wear. The book may have minor markings which are not specifically mentioned. Most items will be dispatched the same or the next working day. Seller Inventory # mon0016107990

Shipping: US$ 11.61
From United Kingdom to U.S.A.
Destination, rates & speeds