Items related to I Hear the Sirens in the Street

McKinty, Adrian I Hear the Sirens in the Street

I Hear the Sirens in the Street 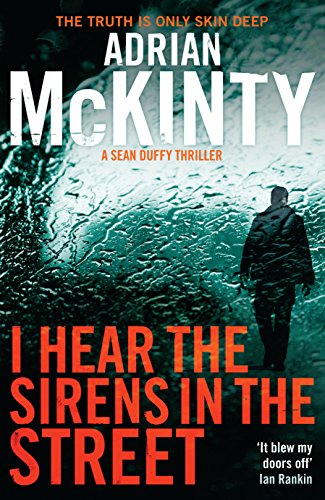 Belfast, 1982. The city is still in recovery from the riots and hunger strikes of the previous year. Newly promoted Detective Inspector Sean Duffy finds a torso in a suitcase. It seems like the perfect crime: no fingerprints, no head. But as Duffy begins to uncover the truth, he discovers that he's not the only one trying to figure out what happened to this dead American ''tourist.'' Somehow the FBI is involved, as is British Intelligence, and it's all connected to a failing car factory just up the road - a factory run by the slick and shady John DeLorean. As Duffy peels back the layers on the case, he realizes that both his job and his life are once again on the line.

ADRIAN McKINTY was born in Carrickfergus, Northern Ireland. He studied politics and philosophy at Oxford before moving to America in the early 1990s. Living first in Harlem, he found employment as a construction worker, barman, and bookstore clerk. In 2000 he moved to Denver to become a high school English teacher and it was there that he began writing fiction. His first full-length novel, Dead I Well May Be, was short-listed for the 2004 Ian Fleming Steel Dagger Award and its sequel, The Dead Yard, was selected as one of the twelve best novels of the year by Publishers Weekly. In 2008 his debut young adult novel, The Lighthouse Land, was short-listed for the 2008 Young Hoosier Award and the 2008 Beehive Award. The final novel in the 'Dead trilogy', The Bloomsday Dead, was long-listed for the 2009 World Book Day Award. In 2011 Falling Glass was an Audible.com Best Thriller. McKinty lives in Seattle, Washington, with his wife and two children.

*Starred Review* A headless torso found in a suitcase presents just the kind of case Detective Inspector Sean Duffy of the Royal Ulster Constabulary wants to pursue, even after he’s ordered to let it go. When the victim is identified as an American poisoned with a rare plant, and the suitcase is found to have belonged to Martin McAlpine—an army reservist and brother of a baronet killed months earlier, presumably by the IRA—the case becomes even more interesting, especially after the detective who did a perfunctory investigation of McAlpine’s murder reopens that case and is himself murdered. It’s 1982, when violence in Northern Ireland threatens to escalate after Britain’s invasion of the Falkland Islands pulls away troops that support the RUC. In this pitch-perfect sequel to The Cold Cold Ground (2012), the second in the author’s Troubles Trilogy, Duffy is nearly overwhelmed by politics. This is crime fiction at its best: a police procedural with dialogue that’s crisp and occasionally lighthearted; blistering action that’s often lethal; McKinty’s mordant Belfastian wit; and a protagonist readers won’t want to leave behind when the trilogy ends. --Michele Leber

1. I Hear the Sirens in the Street: Detective Sean Duffy 2

Book Description Paperback. Condition: Very Good. The book has been read, but is in excellent condition. Pages are intact and not marred by notes or highlighting. The spine remains undamaged. Seller Inventory # GOR004811825

2. I Hear the Sirens in the Street: Detective Sean Duffy 2

Book Description Paperback. Condition: Good. The book has been read but remains in clean condition. All pages are intact and the cover is intact. Some minor wear to the spine. Seller Inventory # GOR004513089

3. I Hear the Sirens in the Street

Book Description Profile Books. Paperback. Condition: Very Good. A copy that has been read, but remains in excellent condition. Pages are intact and are not marred by notes or highlighting, but may contain a neat previous owner name. The spine remains undamaged. At ThriftBooks, our motto is: Read More, Spend Less. Seller Inventory # G1846688183I4N00

4. I Hear the Sirens in the Street: Sean Duffy 2

Book Description Profile Books, 2013. Condition: Good. Ships from the UK. Shows some signs of wear, and may have some markings on the inside. Seller Inventory # GRP97836283

Shipping: US$ 5.20
From United Kingdom to U.S.A.
Destination, rates & speeds

5. I Hear the Sirens in the Street

Book Description Serpent's Tail, 2013. Condition: Good. This is an ex-library book and may have the usual library/used-book markings inside.This book has soft covers. In good all round condition. Please note the Image in this listing is a stock photo and may not match the covers of the actual item,550grams, ISBN:9781846688188. Seller Inventory # 7799980

6. I Hear the Sirens in the Street (Detective Sean Duffy)

Book Description Serpent's Tail 2013-01-10, 2013. Paperback. Condition: Very Good. All books are pre-owned and will have been read by someone else before you. They may well show signs of minor wear and tear. Please note, cover images are illustrative only, and the actual book cover and edition can vary. Seller Inventory # 9781846688188-21

7. I Hear the Sirens in the Street. Adrian McKinty

Book Description Profile Books 2013-01-10, 2013. Paperback. Condition: Very Good. Item is in very good condition. If supplemental codes/CDs for textbooks are required please contact us prior to purchasing as they may be missing. Seller Inventory # DS-1846688183-2

8. I Hear the Sirens in the Street (signed)