From Blackout to Sunlight: The 1940s and 1950s House Explained (Britain's Living History) 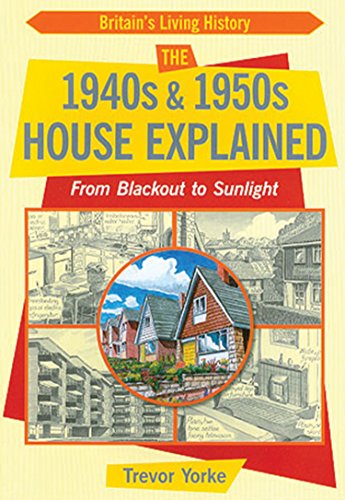 After a golden era of house building in the 1930's, Britain emerged from the Second World War with a desperate need to rebuild its bomb damaged towns and cities. Brighter design, careful planning and what was called 'Townscape' began to replace the traditional character of Victorian housing. The 1951 Festival of Britain was regarded as a tonic to the nation and ushered in modernity in all aspects of living.

Now homes were bathed in sunlight and every where was finished in the new materials of vinyl and Formica. DIY was all the rage, and there were novel ideas in interior decor. New technology introduces the housewife to modern gadgets - cookers, vacuum cleaners and fridges.

This book is ideal for those who want to learn more about the background to the period - how houses and flats were built and fitted out and the different styles of decoration. For some it may be a nostalgic trip; for others a useful starting point to renovating a period home. Trevor Yorke's numerous diagrams, drawings and photographs enhance an authoritative, but approachable text.

Trevor Yorke is an experienced author and artist who specialises in period architecture. His many books include British Architectural Styles, Georgian & Regency Houses Explained, and The English Village Explained

Book Description Paperback. Condition: Very Good. The book has been read, but is in excellent condition. Pages are intact and not marred by notes or highlighting. The spine remains undamaged. Seller Inventory # GOR002712490

2. The 1940s and 1950s House Explained: From Blackout to Sunlight (Britain's Living History)

Book Description -. Paperback. Condition: Very Good. The 1940s and 1950s House Explained: From Blackout to Sunlight (Britain's Living History) This book is in very good condition and will be shipped within 24 hours of ordering. The cover may have some limited signs of wear but the pages are clean, intact and the spine remains undamaged. This book has clearly been well maintained and looked after thus far. Money back guarantee if you are not satisfied. See all our books here, order more than 1 book and get discounted shipping. Seller Inventory # 7719-9781846742217

3. The 1940s and 1950s House Explained: From Blackout to Sunlight (Britain's Living History)

Shipping: US$ 8.81
From United Kingdom to U.S.A.
Destination, rates & speeds