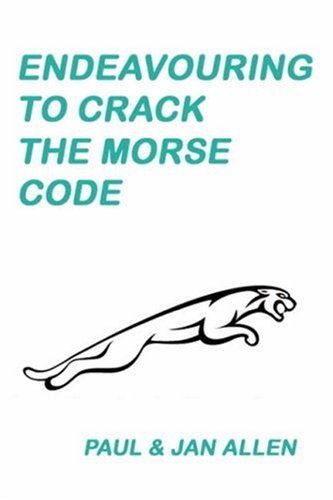 "For the ordinary person, having such a prestigious series as Morse filmed in their street, and meeting and talking to the actors, is very exciting, adding more than a little colour to everyday life". First aired on 6th January 1987, Inspector Morse became a television phenomenon that reshaped fictional history. Now approaching its twenty-fifth anniversary, 'Endeavoring to Crack the Morse Code' traces the journey from book to television screen. Discovering new locations, recollections and trivia from cast, crew and the general public, it provides a fresh insight into the secrets that surround the myths. "Congratulations on the book. The "Morse" Series was great fun to work on and has become a classic I look forward to seeing it". Alan Pinniger. Location Manager. Inspector Morse/ Lewis "Best of luck. It is a great idea". Andrew Speller. Camera Operator. Inspector Morse. "Best wishes with the publishing" Clive Tickner. Cinematographer, Inspector Morse. "Good luck with the book". Julian Mitchell. Writer, Inspector Morse. "I have roughly outlined the job to give you a brief taste". Robin Tarsnane. Production Designer. Inspector Morse/Lewis. "Good Luck" James Scott. Writer. Inspector Morse. "Good luck" Colin Thurston. Property Master. Inspector Morse/ Lewis. "I hope the book is a great success". John Simonds. Pitt Rivers Museum, Oxford

Shipping: US$ 6.81
From United Kingdom to U.S.A.
Destination, rates & speeds

Book Description Exposure Publishing, 2007. Paperback. Condition: Good. Signed. SIGNED BY AUTHORS (unverified). Good condition is defined as: a copy that has been read but remains in clean condition. All of the pages are intact and the cover is intact and the spine may show signs of wear. The book may have minor markings which are not specifically mentioned. Most items will be dispatched the same or the next working day. Seller Inventory # mon0013315579

Shipping: US$ 10.30
From United Kingdom to U.S.A.
Destination, rates & speeds

Book Description Paperback. Condition: Very Good. The book has been read, but is in excellent condition. Pages are intact and not marred by notes or highlighting. The spine remains undamaged. Seller Inventory # GOR002735216

Book Description Exposure Publishing. Soft cover. Condition: Good. 184685511X 2006, 371 pages | this copy shows moderate general wear, some spine creasing; inscribed 'with best wishes' and signed by the authors, otherwise free of notes etc | professional booksellers based in the UK | we package with great care and usually dispatch within 24hrs, always within two working days | please request scans or further information on any of our listings, which are all in stock and ready to be dispatched. Signed by Author(s). Seller Inventory # SKU1011946