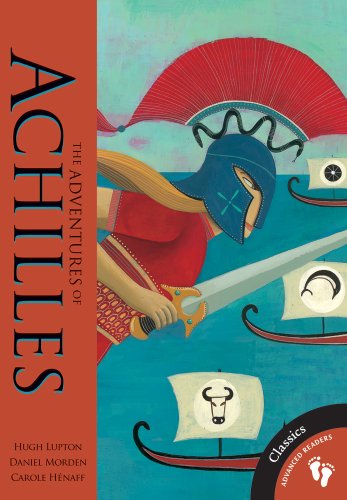 Achilles is the son of a king and a goddess and also the best warrior in Greece. So when Prince Paris claims Helen from a Greek king and Troy declares war, everyone knows that Achilles will be vital to the Greek cause. With the help of the gods, can young Achilles lead his fellow countrymen to victory against the Trojans?

Hugh Lupton and Daniel Morden are already well-known for their adult retelling of The Odyssey. Daniel has been telling stories since 1998, and lives in Wales, England. Hugh has worked on a number of other Barefoot Books titles, including The Story Tree and the award-winning Tales of Wisdom & Wonder. Hugh has been a professional storyteller for the past two decades. When he isn't performing in festivals around the world, he lives in Norfolk, England.

Carole Henaff is inspired by her travels and is never without her sketchbook. She studied theatrical literature in Paris before moving to Barcelona to study graphic design and illustration. Carole has illustrated children s books in France and Spain, including Smara, which was awarded the Isaac Diaz Pardo Prize for Best Illustrated Book, 2006.

For centuries, people of all ages have been fascinated with the myths of the ancient Greek gods. Lupton, a sought-after British storyteller, and Morden, a Welsh storyteller, use their practiced styles to bring the childhood, youth, prowess, and death of Achilles to life. The first four chapters introduce all the characters, both immortal and mortal, who play a significant role in the long war (see chapters 5–12) between the Greeks and citizens of Troy. Achilles, the son of King Peleus and Thetis, is the primary character, though major gods and goddesses interfere at every turn. Hénaff’s color illustrations are done in a style to replicate the ancients, while her detailed facial expressions add wit. The book has no glossary or identifying list of characters, so either bone up beforehand or read it quickly for fun and don’t worry about remembering all the names. Readers who grew up with the d’Aulaires’ Book of Greek Myths (1962) and those hooked on Rick Riordan’s Percy Jackson series will find this a fun read. Grades 5-8. --J. B. Petty