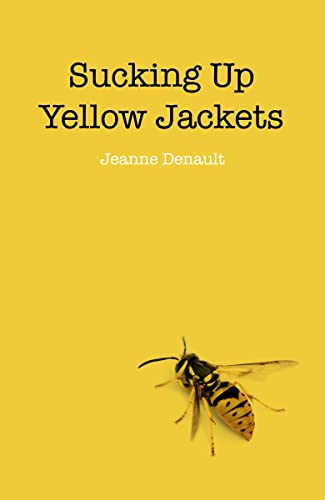 Max loathed confinement. Caught tunneling under the play-yard fence, he climbed up his crib side and dropped to the floor with a thud. Jolted awake, his mother scooped him into her arms and tore through the house. No seven month old baby could do this without help. But he had and repeated it nightly. When he dismantled a neighbor?s swing-set without tools, Max and his more sociable sister were banned from the play-yard. Hoping he would disappear forever, she helped him climb out a window and suggested he go hand over hand along a frail line to a telephone pole sixteen feet above the ground. He thought she was being sweet. Obsessed with explosives and motorcycles, he spent more time in police stations and court than an incompetent bank robber. ER doctors knew him by name. Sucking Up Yellow Jackets is a touching, bizarre, sometimes funny story about the toll undiagnosed Asperger Syndrome took on Max and his family before the syndrome was recognized.

Jeanne Denault is a writer who raised an undiagnosed Aspergers child to adulthood. A member of the Rebel Writers, featured in February 2008 Writers Digest, she lives in Pennsylvania.