Items related to seven days in the art World

seven days in the art World 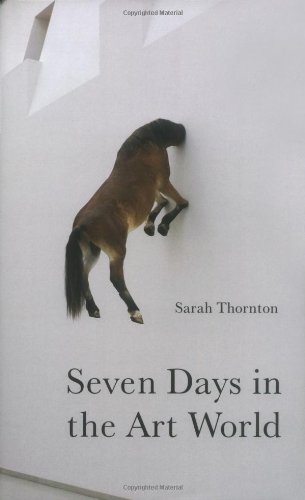 Sarah Thornton's Seven Days in the Art World was named one of the best art books of the year by the New York Times and is available in sixteen languages. She was the chief writer on contemporary art for the Economist. She holds a BA in art history and a PhD in sociology.

*Starred Review* Art and business, personal quests and personality cults, big bucks and the triumph of concept over beauty, being cool and in the know—these are the cardinal points in the contemporary art world. Enter Thornton, an art historian and sociologist with moxie and a brilliant game plan. Willing to ask obvious questions, she infiltrates the seven circles of this competitive realm. An astute observer and stimulating storyteller whose crisp sentences convey a wealth of information, Thornton marvels at the military precision of a Christie’s auction and the wild improvisation of an art-school critique.  On to Art Basel, a major international art fair where the “hard buy” rather than the hard sell is the rule since an artist’s reputation is tied to those who own his or her work. Thornton witnesses the final stage in the judging and presentation of the Turner Prize, watches editors at work at Artforum, attends the coveted Venice Biennale, and spends a dizzying day with the wizardly artist-entrepreneur Takashi Murakami. Thornton’s uniquely clarifying dispatches from the art front glimmer with high-definition profiles of artists, dealers, critics, and collectors, and grapple with the paradoxes inherent in the transformation of creativity into commodity. --Donna Seaman

1. seven days in the art World

Book Description GRANTA BOOKS. Hardcover. Condition: Very Good. A copy that has been read, but remains in excellent condition. Pages are intact and are not marred by notes or highlighting, but may contain a neat previous owner name. The spine remains undamaged. At ThriftBooks, our motto is: Read More, Spend Less. Seller Inventory # G1847080375I4N00

2. seven days in the art World

3. seven days in the art World

Book Description GRANTA BOOKS, 2008. Condition: Good. A+ Customer service! Satisfaction Guaranteed! Book is in Used-Good condition. Pages and cover are clean and intact. Used items may not include supplementary materials such as CDs or access codes. May show signs of minor shelf wear and contain limited notes and highlighting. Seller Inventory # 1847080375-2-4

4. Seven Days in the Art World

5. SEVEN DAYS IN THE ART WORLD

6. SEVEN DAYS IN THE ART WORLD

Book Description GRANTA BOOKS, 2008. Condition: Good. Ships from the UK. Former Library book. Shows some signs of wear, and may have some markings on the inside. Seller Inventory # GRP16867385

7. Seven Days in the Art World.