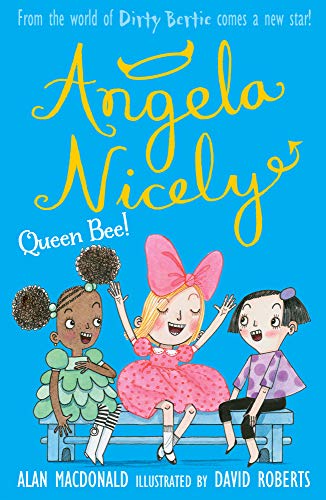 Angela's on a mission! Whether it's trying to succeed as a top model, proving that her head teacher wears a wig, or finding herself out of her depth on a spa weekend, she's determined to make a splash.

Alan MacDonald dreamed of becoming a professional footballer, but when he won a pen in a writing competition his fate was sealed. Alan has written over eighty children's books, which have been translated into many languages and won several awards. Alan also writes for TV. David Roberts worked as a fashion illustrator in Hong Kong before becoming one of the UK's foremost children's illustrators. He has worked with writers including Philip Ardagh, Georgia Byng and former Children's Laureate Julia Donaldson. David won a Gold Award in the Nestle Children's Book Prize for Mouse Noses On Toast in 2006, and was shortlisted for the CILIP Kate Greenaway Medal for The Dunderheads in 2010 and Tinder in 2015.

Book Description Little Tiger Press Group, United Kingdom, 2014. Paperback. Condition: New. David Roberts (illustrator). UK ed. Language: English. Brand new Book. The second book in a brand new series from David Roberts and Alan MacDonald, the best-selling team that brought you Dirty Bertie. Angela Nicely might look like she's made of sugar and spice and all things nice, but nothing could be further from the truth!Queen Bee features three wickedly funny stories about Angela. Whether she's matchmaking her teachers, flogging homemade lemonade, or dealing with the Ugly Sisters, she always has an answer for everything. With fantastic artwork by award-winning illustrator, David Roberts (Tyrannosaurus Drip, The Wind in the Willows, The Troll, Eddie Dickens Trilogy), these stories are perfect for confident readers to enjoy by themselves, or for sharing with your child. Angela Nicely is sure to delight young readers, with her larger-than-life personality and her desire to be the best!. Seller Inventory # AA79781847153753

Shipping: US$ 37.72
From United Kingdom to U.S.A.
Destination, rates & speeds