Promethean Love: Paul Kurtz and the Humanistic Perspective on Love 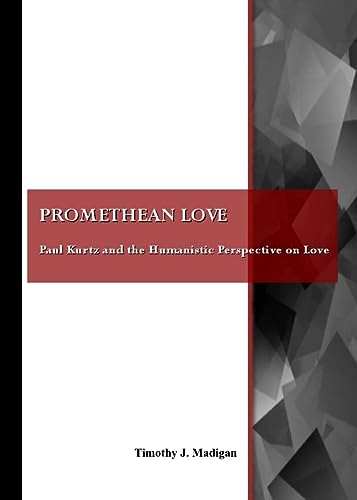 The myth of Prometheus has inspired countless generations of humanists throughout the ages. Prometheus -- who stole fire from the gods and gave it to humans to help them survive -- remains a symbol for those who reject theistic orthodoxies and who fearlessly challenge accepted beliefs. Artists such as Byron, Goethe, Beethoven and Wagner have been influenced by this story. Most importantly, Prometheus is a symbol for selfless love. In this collection of essays, the Promethean myth and its relationship to the philosophy of love is explored from its origins in Ancient Greece, to its similarities and contrasts with the figure of Christ. Special emphasis is given to the work and writings of Paul Kurtz, the foremost contemporary defender of humanism as a worldview, who has made the figure of Prometheus a special part of his own philosophy.

Timothy J. Madigan teaches philosophy at St. John Fisher College, and is on the editorial board of Philosophy Now magazine. He was formerly the editor of Free Inquiry magazine.

1. Promethean Love: Paul Kurtz and the Humanistic Perspective on Love

Book Description Cambridge Scholars Publishing 2008-09-01, 2008. Paperback. Condition: Good. Item is in good condition. Some moderate creases and wear. This item may not come with CDs or additional parts including access codes for textbooks. Might be an ex-library copy and contain writing/highlighting. Seller Inventory # DS-1847187587-3

2. Promethean Love: Paul Kurtz and the Humanistic Perspective on Love

3. Promethean Love: Paul Kurtz and the Humanistic Perspective on Love

Shipping: US$ 10.39
From United Kingdom to U.S.A.
Destination, rates & speeds