Items related to The Girl with the Dragon Tattoo (Millennium Trilogy...

The Girl with the Dragon Tattoo (Millennium Trilogy Book 1) 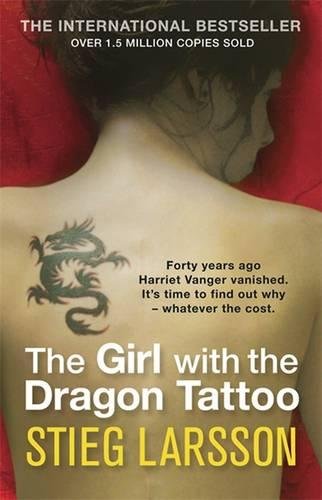 Amazon Best of the Month, September 2008: Once you start The Girl with the Dragon Tattoo, there's no turning back. This debut thriller--the first in a trilogy from the late Stieg Larsson--is a serious page-turner rivaling the best of Charlie Huston and Michael Connelly. Mikael Blomkvist, a once-respected financial journalist, watches his professional life rapidly crumble around him. Prospects appear bleak until an unexpected (and unsettling) offer to resurrect his name is extended by an old-school titan of Swedish industry. The catch--and there's always a catch--is that Blomkvist must first spend a year researching a mysterious disappearance that has remained unsolved for nearly four decades. With few other options, he accepts and enlists the help of investigator Lisbeth Salander, a misunderstood genius with a cache of authority issues. Little is as it seems in Larsson's novel, but there is at least one constant: you really don't want to mess with the girl with the dragon tattoo. --Dave Callanan

Stieg Larsson was the Editor-in-Chief of the magazine Expo. He was a leading expert on anti-democratic, right-wing extremist organisations. He died in 2004, soon after delivering the text of the novels that make up the Millennium Trilogy.

1. The Girl with the Dragon Tattoo (Millennium Trilogy Book 1)

Book Description Maclehose Press, 2008. Paperback. Condition: New. First edition. Mint condition.Maclehose Press,2008.First edition-27th printing.Paperback in mint condition.538pp. This is another paragraph Product Description: Forty years ago, Harriet Vanger disappeared off the secluded island owned and inhabited by the powerful Vanger family. There was no corpse, no witnesses, no evidence. But her uncle, Henrik, is convinced that she was murdered by someone in her own family - the deeply dysfunctional Vanger clan. Disgraced journalist Mikael Blomqvist is hired to investigate, but when he links Harriet's disappearance to a string of gruesome murders from forty years ago, he needs a competent assistant - and he gets one: computer hacker Lisbeth Salander - a tattoed, truculent, angry girl who rides a motorbike like a Hell's Angel and handles makeshift weapons with the skill born of remorseless rage. This unlikely pair form a fragile bond as they delve into the sinister past of this island-bound, tightly-knit family. But the Vangers are a secretive lot, and Mikael and Lisbeth are about to find out just how far they're prepared to go to protect themselves - and each other. Seller Inventory # 3350

2. THE GIRL WITH THE DRAGON TATTOO