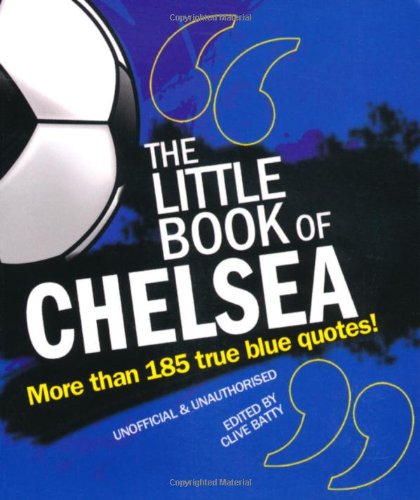 "In the 70s, it was Leeds; in the 80s it was Liverpool; and, in the 90s it [was] Manchester United. Now Chelsea are the team for the millenium. The team that everybody loves to hate, that is."  Observer There are few football clubs in the world that attract as much interest in the modern game as Chelsea. Whether it is the latest observations from coach Carlo Ancelotti, big-money transfer targets, the style of play or results in Europe, everybody thinks they know what’s happening or at least has an opinion on it. From Ron "Chopper" Harris and Ken Bates through to Ruud Gullit, Roberto Di Matteo, Jose Mourinho, John Terry, Frank Lampard, and Damian Duff, there is no lack of characters to draw on for quotes and this tiny guide has them all.

Clive Batty, a rabid Chelsea fan, has written or edited a number of books and compilations on Chelsea, including The Chelsea Miscellany, A Serious Case of the Blues, Kings of the Kings Road, The Little Book of Jose Mourinho, and The Pocket Book ofChelsea.