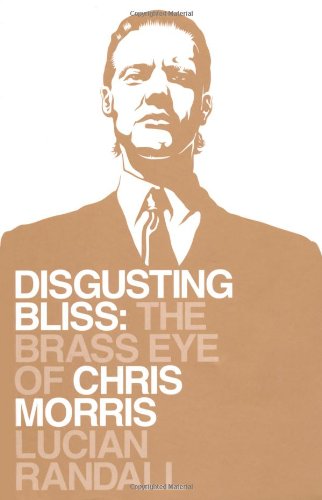 The Sunnewspaper asked if Chris Morris's July 2001 Brass Eye Special on paedophilia was 'the sickest TV ever?' It was certainly the most controversial, though his uncompromising style of comedy meant he was rarely far from trouble.

Morris first came to national prominence at the heart of a group of virtually unknown comedians brought together by Armando Iannucci. This book follows them from their 1991 news satire On the Hour, which transferred from radio to television where it was reinvented as the equally successful The Day Today. It became impossible to watch bulletins without thinking of Morris's Paxmanesque anchor character chastising a reporter -- 'Peter! You've lost the news!' -- or authoritatively delivering nonsense headlines: 'Sacked chimney worker pumps boss full of mayonnaise.' Meanwhile co-star Steve Coogan created a lasting anti-hero in Alan Partridge, imbued with a horrible life all of his own.

But Morris himself was always the most compelling character of all. Drawing on exclusive new interviews and original research, this book creates a compelling portrait of Morris from his earliest radio days and of the comedians and writers who frequently took on the industry they worked in, polarising opinion to such a degree that government ministers threatened to ban them entirely. THIS IS THE NEEEWWWWS!

Lucien Randall is the author of Ginger Geezer.

"Ugh, isn’t it annoying how we never find out about British comics until after the fact (i.e. Ricky Gervais, Sacha Baron Cohen)? We wanted to stay ahead of the curve before Chris Morris explodes onto the American scene with a spoof on 9/11."  —Buzzfeed.com

"Sundance's greatest provocation was Four Lions, co-written and directed by British comedian Chris Morris, who comes from the same satirical background as Steve Coogan and In the Loop's Armando Iannucci. Morris' TV work, like his brilliant Brass Eye, cuts close to the bone . . . Four Lions, the story of a group of British jihadis, isn't as incessantly caustic as some of Morris' most incendiary satires, but its complexity of tone is stunning, ranging from outright slapstick to tragic farce. Morris manages to encompass the absurdity and the profound toxicity of religious extremism, overlaying them on top of each other until you don't know which end is up. Distributors have been chary about picking up the film, but the lucky company will be rewarded—in the next life, if not this one."  —Philadelphia City Paper

"A detailed and utterly absorbing account of the rise of the enigmatic and doggedly determined master saboteur."  —Metro