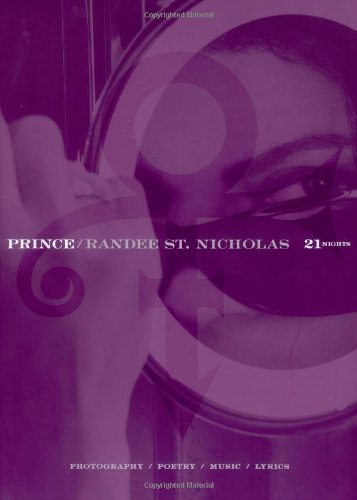 This beautifully designed photographic essay flows from Prince's sensational, unprecedented, record-breaking, sold-out 21 concerts in 21 nights at London's O2 Arena in 2007. Juxtaposing his dueling worlds of music and solitude, it will incorporate Prince's evocative poetry and lyrics to new songs and other selections, and 1

As one of the greatest American Pop Music icons, Prince has won numerous awards including an Academy Award, Golden Globe, Brit Award, and several Grammy Awards throughout his highly successful career. Prince’s super stardom took off with his album Purple Rain (concurrent with the film of the same name in the 80s. Most recently, in 2004 with the release of his album Musicology, Pollstar named Prince the top concert draw among musicians in America. Prince's Musicology Tour was the most profitable tour in the music industry that year. He was inducted into the Rock & Roll Hall of Fame in 2004 and into the UK Hall of Fame in 2006.

Randee St. Nicholas is one of the music and entertainment industries' most acclaimed portrait photographers. She photographed Whitney numerous times throughout her career and directed the music video for "I'm Every Woman." She lives in Los Angeles.

Starred Review. For international pop star Prince's first book, photographer St. Nicholas set up shop during the performer's 2007 sold-out 21-night stand at the O2 Center in London. In Prince's room, by the hotel elevator, backstage at the concert hall, out on the streets after-hours and on stage, St. Nicholas dazzles with one magical shot after another. Perhaps the most enigmatic and tight-lipped of modern rock stars, St. Nicholas says in her introduction that "to know him is to know that you probably will never really know him and to question that is a waste of time." Images reveal quiet joy and pronounced solitude, pensiveness and passion, like a two-shot of Prince sitting head down at his mirrored piano, eyes closed, fingers worn down by guitar strings. Though at first glance many of these images--vividly colored, dynamically framed--appear staged, this hefty, gorgeous tome is filled largely with off-the-cuff shots of the artist and his band, the New Power Generation. Accompanying photos are Prince's lyrics and poetry--he writes a lot about women and biblical lessons--as well as a 15-track CD recorded live at London's Indigo club, where he played most nights after the concert. Though the low-light restriction at times interferes with a perfect print, St. Nicholas has crafted a gorgeous, raw and honest portrait of one of the world's most elusive musicians, a worthy addition to any fan's library.
Copyright © Reed Business Information, a division of Reed Elsevier Inc. All rights reserved.