Items related to Days of Gold 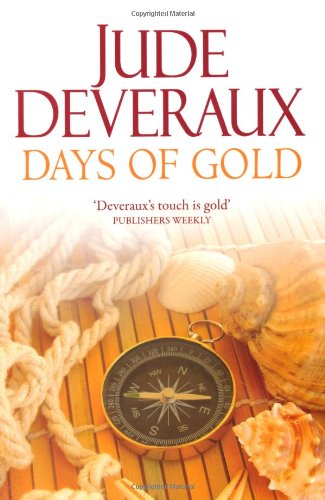 When Edilean Talbot turns up at her uncle's castle in Scotland, she wins over the local clans, but Laird Angus McTern is not impressed. Edilean's inheritance is stolen and Angus - swallowing his pride - recaptures the pilfered gold which leads to a shipboard romance. But the lovers must overcome many obstacles before they can be together.

Book Description
New York Times bestselling author Jude Deveraux returns to her roots in this sweeping historical romance with a dazzling story that spans two continents and unites two people who are separated by class, wealth, and education.

In 1766 Scotland, the laird of the clan, Angus McTern, has everything he wants in life. Although his grandfather lost the family's land and castle in a card game when Angus was just a boy, Angus takes his duties seriously and is respected by all the men and adored by the women. That is, until Edilean Talbot shows up.

Breathtakingly beautiful and born of privilege, Edilean represents everything Angus despises. Still he is as dazzled by her as everyone else is, and he can keep his feelings hidden from her for only so long. When she rejects him he is deeply wounded and, worse, humiliated before his clan. But then the day comes when Edilean needs Angus's help, to reclaim the gold she inherited from her father, which is on its way to America. At first Angus refuses, but her beauty--and her tears--so haunt him that he puts aside his pride and decides to aid the heiress. However, when Angus tries to intervene, he's accused of kidnapping and theft. To avoid being prosecuted, he's forced to leave behind all that he knows and loves and escape with Edilean to America. There they will overcome almost insurmountable obstacles as they are pursued endlessly by the man who claims the gold for his own. Despite all that tries to keep them apart, Angus and Edilean also find a love as wild and free as the land itself.

The second book in the multigenerational Edilean Series that began with Lavender Morning, Days of Gold is filled with passion, humor, exquisite detail, and pulse-pounding adventure. Stirring and masterfully rendered, this is Jude Deveraux at her best.

Amazon Exclusive: A Note to Readers from Author Jude Deveraux

I came to write Days of Gold because I was curious. In the early pages of Lavender Morning, I'd written a few sentences about the founding of the little town I'd created, Edilean, Virginia. They briefly told the story of a young man kidnapping a rich man's daughter, along with a wagon full of gold, and taking her to America. All through the writing of Lavender Morning, I wondered about that story. Had the young woman been taken away forcibly, or had she run off of her own free will? By the time I finished the book, I knew I had to find out the answers to my questions. I decided to write my first historical in eight years, the story of the founders of Edilean, Virginia.

I very much enjoyed writing the book. It was fun to again visualize kilts and horses, and a huge sailing ship headed for the newly formed American colonies. I loved the attempts of my hero, Angus, to be noble and Edilean, my heroine, as she got angry at him when he made decisions without consulting her. My favorite scene in the books is when Edilean nearly shoots Angus. By that time, he deserved being shot!

I also fell in love with the people around them. I felt so sorry for Prudence, the wife of the awful man, James, that I knew I had to give her a good ending. I truly loved her and Shamus! By the time I finished Days of Gold, I had a better idea of how Edilean started, and about all the people of Edilean. When I wrote my next contemporary novel, Scarlet Nights, I could see where people had come from, and had an idea of where they were going.

Jude Deveraux is the author of forty-one New York Times bestsellers, including MOONLIGHT IN THE MORNING, SCENT OF JASMINE, SCARLET NIGHTS, DAYS OF GOLD, LAVENDER MORNING, RETURN TO SUMMERHOUSE, and SECRETS. To date, there are more than sixty million copies of her book in print worldwide. She lives in Florida. To learn more, visit www.judedeveraux.com.

Buy Used
Condition: Very Good
Days of Gold This book is in very... Learn more about this copy

Book Description -. Paperback. Condition: Very Good. Days of Gold This book is in very good condition and will be shipped within 24 hours of ordering. The cover may have some limited signs of wear but the pages are clean, intact and the spine remains undamaged. This book has clearly been well maintained and looked after thus far. Money back guarantee if you are not satisfied. See all our books here, order more than 1 book and get discounted shipping. Seller Inventory # 7719-9781847375537