Items related to The Winds of Dune 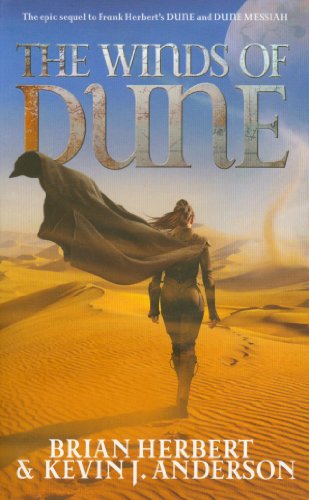 Kevin J. Anderson has over 20 million books in print in 30 languages worldwide. He is the author of, among others, the X-FILES novels, GROUND ZERO and the JEDI ACADEMY trilogy of STAR WARS novels - the three bestselling SF novels of 1994. He has also co-written the international bestselling prequels to Frank Herbert's monumental DUNE series. He has won, or been nominated for, many awards including the Nebula Award and the Bram Stoker Award. Visit his website www.wordfire.com The son of Frank Herbert (1920-86), Brian Herbert is a bestselling SF author in his own right. He has also written Dreamer of Dune, a comprehensive, Hugo Award-nominated biography of Frank Herbert.

After the overthrow of Shaddam IV, the reign of Paul-Muad'Dib lasted fourteen years. He established his new capital in Arrakeen on the sacred desert planet, Dune. Though Muad'Dib's Jihad is over at long last, conflicts continue to flare up.   Paul's mother, the Lady Jessica, has withdrawn from the constant battles and political schemes and returned to the Atreides ancestral home of Caladan to serve there as Duchess.

In my private life on Caladan, I receive few reports of my son's Jihad, not because I choose to be ignorant, but because the news is rarely anything I wish to hear. -Lady Jessica, Duchess of Caladan

The unscheduled ship loomed in orbit over Caladan, a former Guild Heighliner pressed into ser vice as a Jihad transport. A young boy from the fishing village, apprenticed to the Castle as a page, rushed into the garden courtyard. Looking awkward in his formal clothing, he blurted, "It's a military- equipped vessel, my Lady. Fully armed!"

Kneeling beside a rosemary bush, Jessica snipped off fragrant twigs for the kitchens. Here in her private garden, she maintained flowers, herbs, and shrubs in a perfect combination of order and chaos, useful flora and pretty pleasantries. In the peace and stillness just after dawn, Jessica liked to work and meditate here, nourishing her plants and uprooting the per sis tent weeds that tried to ruin the careful balance.

Unruffled by the boy's panic, she inhaled deeply of the aromatic evergreen oils released by her touch. Jessica rose to her feet and brushed dirt off her knees. "Have they sent any messages?"

"Only that they are dispatching a group of Qizarate emissaries, my Lady. They demand to speak with you on an urgent matter."

The young man quailed at her expression. "I'm sure they meant it as a request, my Lady. After all, would they dare to make demands of the Duchess of Caladan- and the mother of Muad'Dib? Still, it must be important news indeed, to warrant a vessel like that!" The young man fidgeted like an eel washed up on shore.

She straightened her garment. "Well, I'm sure the emissary considers it important. Probably just another request for me to increase the limits on the number of pilgrims allowed to come here."

Caladan, the seat of House Atreides for more than twenty generations, had escaped the ravages of the Jihad, primarily because of Jessica's refusal to let too many outsiders swarm in. Caladan's self- sufficient people preferred to be left alone. They would gladly have accepted their Duke Leto back, but he had been murdered through treachery at high levels; now the people had his son Paul- Muad'Dib instead, the Emperor of the Known Universe.

Despite Jessica's best efforts, Caladan could never be completely isolated from the outside storms in the galaxy. Though Paul paid little attention to his home planet anymore, he had been christened and raised here; the people could never escape the shadow cast by her son. After all the years of Paul's Jihad, a weary and wounded peace had settled over the Imperium like a cold winter fog. Looking at the young messenger now, she realized that he had been born after Paul became Emperor. The boy had never known anything but the looming Jihad and the harsher side of her son's nature. . . .

She left the courtyard gardens, shouting to the boy. "Summon Gurney Halleck. He and I will meet the delegation in the main hall of Castle Caladan."

Jessica changed out of her gardening clothes into a sea- green gown of state. She lifted her ash- bronze hair and draped a pendant bearing a golden Atreides hawk crest around her neck. She refused to hurry. The more she thought about it, the more she wondered what news the ship might bring. Perhaps it wasn't a trivial matter after all. . . .

Gurney was waiting for her in the main hall. He had been out running his gaze hounds, and his face was still flushed from the exercise. "According to the spaceport, the emissary is a high- ranking member of the Qizarate, bringing an army of retainers and honor guards from Arrakis. Says he has a message of the utmost importance."

She pretended a disinterest she did not truly feel. "By my count, this is the ninth 'urgent message' they've delivered since the Jihad ended two years ago."

"Even so, my Lady, this one feels different."

Gurney had aged well, though he was not, and never would be, a handsome man with that inkvine scar on his jaw and those haunted eyes. In his youth he'd been ground under the Harkonnen boot, but years of brave ser vice had shaped him into one of House Atreides's greatest assets.

She lowered herself into the chair that her beloved Duke Leto had once used. While scurrying castle servants prepared for the emissary and his entourage, the director of the kitchen staff asked Jessica about appropriate refreshments. She answered in a cool tone, "Just water. Serve them water."

"Nothing else, my Lady? Is that not an insult to such an important personage?"

Gurney chuckled. "They're from Dune. They'll consider it an honor." The foyer's oaken castle doors were flung open to the damp breeze, and the honor guard marched in with a great commotion. Fifteen men, former soldiers from Paul's Jihad, carried green banners with highlights of black or white. The members of this unruly entourage wore imitation stillsuits as if they were uniforms, though stillsuits were completely unnecessary in Caladan's moist air. Glistening droplets covered the group from the light drizzle that had begun to fall outside; the visitors seemed to consider it a sign from God.

The front ranks of the entourage shifted aside so that a Qizara, a yellow- robed priest of the Jihad, could step forward. The priest lowered his damp hood to show his bald scalp, and his eyes glittered with awe, completely blue from addiction to the spice melange. "I am Isbar, and I present myself to the mother of Muad'Dib." He bowed, then continued the bow all the way to the floor until he had prostrated himself. "Enough of this. Everyone here knows who I am."

Even when Isbar stood, he kept his head bowed and his eyes averted. "Seeing the bounty of water on Caladan, we more fully understand Muad'Dib's sacrifice in coming to Dune as the savior of the Fremen." Jessica's voice had enough of an edge to show that she did not wish to waste time on ceremony. "You have come a long way. What is the urgency this time?"

Isbar seemed to wrestle with his message as if it were a living thing, and Jessica sensed the depth of his dread. The members of the honor guard remained silent as statues.

"Out with it, man!" Gurney ordered.

The priest blurted, "Muad'Dib is dead, my Lady. Your son has gone to Shai- Hulud."

Jessica felt as though she had been struck with a cudgel.

Isbar continued, anxious to purge himself of his words. "Forsaking his rule, the holy Muad'Dib walked out into the desert and vanished into the sands."

It took all of Jessica's Bene Gesserit training to erect a thick wall around herself, to give herself time to think. The shutdown of her emotions was automatic, ingrained. She forced herself not to cry out, kept her voice quiet and steady. "Tell me everything, priest."

The Qizara's words stung like sand pellets blown by a harsh wind. "You know of the recent plot by traitors among his own Fedaykin. Even though blinded by a stone- burner, the blessed Muad'Dib viewed the world with divine eyes, not the artificial Tleilaxu ones that he purchased for his injured soldiers."

Yes, Jessica knew all of that. Because of her son's dangerous decisions, and backlash from the Jihad, he'd always faced the very real threat of assassination. "But Paul survived the plot that blinded him. Was there another one?"

"An extension of the same conspiracy, Great Lady. A Guild Steersman was implicated, as well as the Reverend Mother Gaius Helen Mohiam." He added, as an afterthought, "By order of the Imperial Regent Alia, both have now been executed along with Korba the Panegyrist, architect of the cabal against your son."

Too many facts clamored at her at once. Mohiam, executed? That news shook her to the core. Jessica's relationship with the old Reverend Mother had been tumultuous, love and hate cycling like the tides. Alia . . . Regent now? Not Irulan? Of course, it was appropriate. But if Alia was the ruler . . . "What of Chani, my son's beloved? What of Princess Irulan, his wife?"

"Irulan has been imprisoned in Arrakeen until her involvement in the plot can be mea sured. Regent Alia would not allow her to be executed with the others, but it is known that Irulan associated with the traitors." The priest swallowed hard. "As for Chani . . . she did not survive the birth of the twins."

"Twins?" Jessica shot to her feet. "I have grandchildren?"

"A boy and a girl. Paul's children are healthy, and-"

Her calm façade slipped dangerously. "You did not think to inform me of this immediately?" She struggled to or ga nize her thoughts. "Tell me all that I need to know, without delay."

The Qizara fumbled with his story. "You know of the ghola who was a gift to Muad'Dib from the Tleilaxu and the Guild? He turned out to be a weapon, an assassination tool created from the slain body of a faithful Atreides retainer."

Jessica had heard of the ghola grown from Duncan Idaho's dead cells, but had always assumed him to be some sort of exotic performer or Jongleur mimic.

"Hayt had the appearance and mannerisms of Duncan Idaho, but not the memories," the priest continued. "Though programmed to kill Muad'Dib, his true personality surfaced and defeated the alter ego, and through that crisis he became the true Duncan Idaho again. Now he aids the Imperial Regent Alia."

At first, the idea amazed her- Duncan, truly alive and aware again?- then her focus returned to the most pressing question. "Enough ...

Book Description Paperback. Condition: Good. Connecting readers with great books since 1972. Used books may not include companion materials, some shelf wear, may contain highlighting/notes, may not include cdrom or access codes. Customer service is our top priority!. Seller Inventory # S_318427680

Book Description Condition: Good. A+ Customer service! Satisfaction Guaranteed! Book is in Used-Good condition. Pages and cover are clean and intact. Used items may not include supplementary materials such as CDs or access codes. May show signs of minor shelf wear and contain limited notes and highlighting. Seller Inventory # 1847394280-2-4

Book Description Paperback. Condition: Used; Good. **SHIPPED FROM UK** We believe you will be completely satisfied with our quick and reliable service. All orders are dispatched as swiftly as possible! Buy with confidence!. Seller Inventory # 4113348