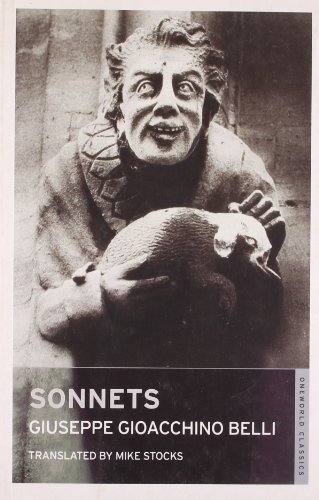 Writing clandestine sonnets in local dialect for more than 15 years while leading a respectably conformist life of letters and bureaucracy, Giuseppe Gioacchino Belli erected a lasting poetical monument to the people of 19th-century Rome. Set against the checkered background of the city of the six Ps—pope, priests, princes, prostitutes, parasites, and the poor—Belli's sometimes scandalous sonnets deal with life's elementals love, death, sex, food, money, family, religion, and politics. In his immense oeuvre, sampled here in a sizeable and varied selection of the best poems, people from every course and manner of life have their say—housewives, mothers, beggars, lovers, businessmen, popes, whores, doctors, thieves, lawyers, priests, pen-pushers, actresses, gossips, and many more. Their voices and preoccupations are brilliantly and accurately rendered in this volume by Mike Stocks, one of the finest sonneteers of our day.

Book Description Alma Books Ltd. PB. Condition: New. Belli was an Italian poet of the 19th century who was most famous for the sonnets that he wrote in the Roman dialect called Romanesco, a derivative of the Italian language that is still spoken today. He was also a scholarly recorder of the filth and blasphemy of the language. This selection of poems includes some of his scandalous sonnets and offers some of the best views of Roman life in the mid eighteen hundreds. Seller Inventory # 9781847490117