Items related to Exercises in Style 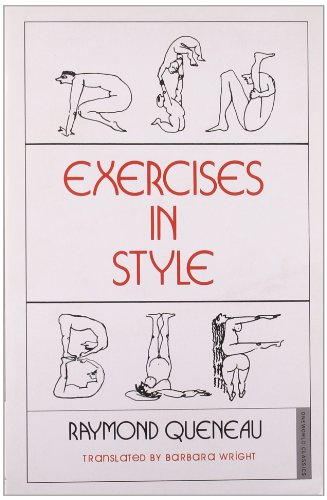 On a crowded bus at midday, Raymond Queneau observes one man accusing another of jostling him deliberately. When a seat is vacated, the first man appropriates it. Later, in another part of town, Queneau sees the man being advised by a friend to sew another button on his overcoat. Exercises in Style retells this apparently unexceptional tale ninety- nine times, employing the sonnet and the alexandrine, Ze Frrench and Cockney , while an Abusive chapter heartily deplores the events. When Exercises in Style first appeared in French in 1947, it led to Queneau s election to the highly prestigious Acade?mie Goncourt. This virtuoso set of themes and variations is a linguistic rust-remover, a guide to literary forms, a demonstration of the use of imagery and expletive. But it is far too funny to be merely a pedantic thesis. The late Raymond Queneau, novelist, poet, mathematician and editor, once told Barbara Wright that of all his books, this was the one he most wished to see translated. He rendered her his ''heartiest congratulations'', adding: ''I have always thought that nothing is untranslatable. Here is new proof. And it is accomplished with all the intended humour. It has not only linguistic knowledge and ingenuity, it has that.''

A twentysomething bus rider with a long, skinny neck and a goofy hat accuses another passenger of trampling his feet; he then grabs an empty seat. Later, in a park, a friend encourages the same man to reorganize the buttons on his overcoat. In Raymond Queneau's Exercises in Style, this determinedly pointless scenario unfolds 99 times in twice as many pages. Originally published in 1947 (in French), these terse variations on a theme are a wry lesson in creativity. The story is told as an official letter, as a blurb for a novel, as a sonnet, and in "Opera English." It's told onomatopoetically, philosophically, telegraphically, and mathematically. The result, as translator Barbara Wright writes in her introduction, is "a profound exploration into the possibilities of language." I'd say it's a refresher course of sorts, but it's more like a graduate seminar. After all, how many of us are familiar with terms such as litote, alexandrine, apheresis, and epenthesis in the first place?

Raymond Queneau (1903-1976) was a poet, novelist, editor, scholar and mathematician. He is best remembered for Exercises in Style and Zazie in the Metro.