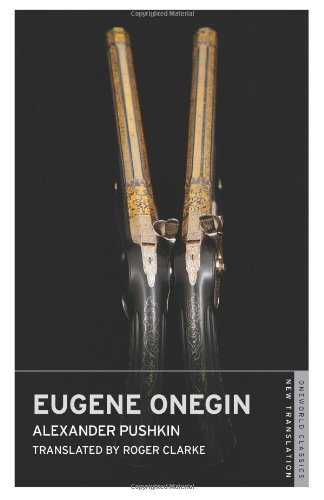 Addressing fundamental themes such as the conflicts between art, reality, and social convention, Eugene Onegin was the founding text of modern Russian literature

When the Romantic and world-weary dandy Eugene Onegin moves from St. Petersburg to take up residence in the country estate he has inherited, he strikes up an unlikely friendship with his mild-mannered neighbor, the poet Vladimir Lensky. Coldly rejecting the amorous advances of Tatyana and cynically courting her sister Olga—Lensky's fiancée—Onegin finds himself dragged into a tragedy of his own doing. Marking a clean break from the high-flown classical style of its predecessors, this ground breaking novel introduced the quintessentially Russian hero and heroine that would remain the archetypes for subsequent novelists throughout the nineteenth century.

Alexander Pushkin (1799–1837) was a dramatist, novelist, and poet, penning such influential works as The Captain's Daughter. Roger Clarke has translated Boris Godunov and Little Tragedies and Ruslan and Ludmila.

Book Description Paperback. Condition: Very Good. The book has been read, but is in excellent condition. Pages are intact and not marred by notes or highlighting. The spine remains undamaged. Seller Inventory # GOR008932662

Book Description Condition: Very Good. Ships from the UK. Former library book; may include library markings. Used book that is in excellent condition. May show signs of wear or have minor defects. Seller Inventory # GRP72807068

Book Description Paperback. Condition: Very Good. WE ARE PROCESSING ORDERS AS NORMAL DURING THIS VIRUS EPIDEMIC, ALL ITEMS ARE SENT BY ROYAL MAIL. DISPATCHED FROM THE UK WITHIN 24 HOURS ( BOOKS ORDERED OVER THE WEEKEND DISPATCHED ON MONDAY) BY ROYAL MAIL. ALL OVERSEAS ORDERS SENT BY AIR MAIL. WE ALSO ACCEPT PAYMENT IN US DOLLARS OR EURO BY BANK TRANSFER. Seller Inventory # mon0000741288

Shipping: US$ 17.89
From United Kingdom to U.S.A.
Destination, rates & speeds

Shipping: US$ 28.90
From United Kingdom to U.S.A.
Destination, rates & speeds