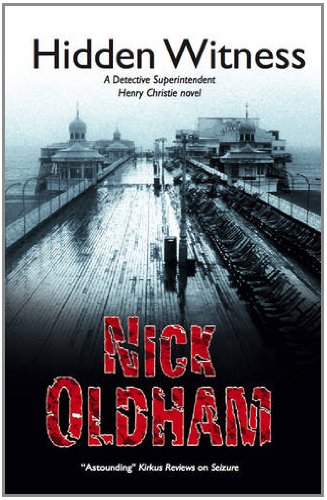 When 14-year-old Mark Carter witnesses the brutal murder of a seemingly innocent old man, he flees from the scene, narrowly avoiding a fatal encounter with the killer. Mark knows he has seen too much and, with no one to turn to, goes into hiding. Detective Superintendent Henry Christie leads the search for the murderer.

the well-reviewed author of several crime novels, including The Last Big Job, A Time for Justice, One Dead Witness and Nightmare City Backlash is his first novel for Severn House..

Oldham may not yet have the name recognition of a John Harvey or an Ian Rankin, but his books have the same dark, disturbing grittiness, menacing threat of violence, and flawed heroes. This time Detective Superintendent Henry Christie struggles with a case in which a seemingly respectable Blackpool businessman is hit by a car and then shot. Christie soon links the man’s death to an Italian Mob, but then the investigation stalls. Eventually, Christie learns that teenager Mark Carter and his buddy, Rory, witnessed the killing. But the boys have disappeared. At first believing they’ve gone to ground, Christie is shocked when Rory’s bullet-riddled body is found. The only remaining witness is young Carter, whom Christie knows from a previous case. Keen to find the boy, Christie fears the killers will find him first. Fast-paced action, gripping suspense, and a keep-’em-guessing plot will edge Oldham closer to the widespread recognition he deserves. --Emily Melton

Book Description Severn House Publishers, 2011. Condition: Good. 0th Edition. Ships from the UK. Former Library book. Shows some signs of wear, and may have some markings on the inside. Seller Inventory # GRP78909047

Book Description Paperback. Condition: Very Good. The book has been read, but is in excellent condition. Pages are intact and not marred by notes or highlighting. The spine remains undamaged. Seller Inventory # GOR003838975

Book Description Severn House Trade Paperback 2011-08-01, 2011. Paperback. Condition: Good. Item is in good condition. Some moderate creases and wear. This item may not come with CDs or additional parts including access codes for textbooks. Might be an ex-library copy and contain writing/highlighting. Seller Inventory # DS-1847512933-3