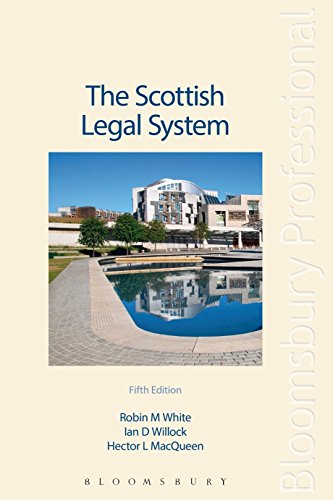 A course on the Scottish legal system is a compulsory part of undergraduate degrees in Scots Law. The Scottish Legal System sets out to present the legal system and law of Scotland as a unique and constantly changing human enterprise and places the Scottish legal system in its broader political and social contexts. As well as case law on devolution and human rights issues in Scotland, this new fifth edition also covers: The Treaty of Lisbon 2007 as it came into force in 2009;The Scotland Act 2012; The Tribunals, Courts and Enforcement Act 2007; The Arbitration (Scotland) Act 2010; The Legal Services (Scotland) Act 2010;Reference is also made to further possible reforms to the system in the future resulting from the Gill Review of Civil Justice.This text is an invaluable introduction for students and anyone with an interest in the Scottish legal system.

Shipping: US$ 37.83
From United Kingdom to U.S.A.
Destination, rates & speeds