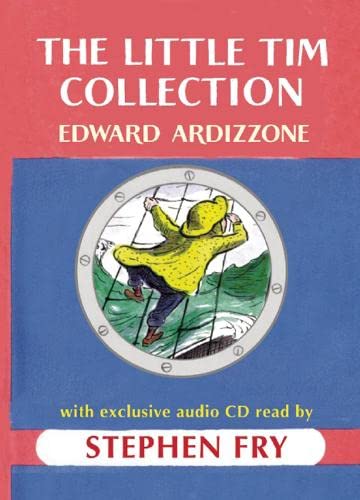 A wonderful boxed set of six classic Little Tim stories with a free bonus audiobook CD of them read by Stephen Fry.
Tim and Ginger - Ginger pays no heed to the advice of the old boatman about dangerous tides. When he goes shrimping, he soons gets into trouble. Tim bravely rows a small boat out to sea to find his friend, but danger looms ahead!
Tim's Friend Towser - Tim and Ginger find a puppy in one of the lifeboats and decide to call him Towser. But as Towser grows bigger and bigger, they have to work very hard at keeping him a secret. Captain Piper hates dogs!
Tim in Danger - Ginger is fed up with life on dry land. One morning, Charlotte and Tim wake to find a note saying he's run away to the high seas. They set off to find him, but with no money, the only way they can do it is to sign on with a ship's crew.
Tim All Alone - Tim arrives home after a long holiday only to find his parents have vanished. The courageous Tim is determined to search the whole wide world, if necessary, to find them. Many people offer to help, but sometimes their help is the last thing he needs!
Tim to the Rescue - Bored with his schoolwork, Tim longs to be at sea again, when who should appear but Captain McFee! Back on board ship, Tim befriends Ginger, the first ship's boy. Unfortunately, mischievous Ginger will need all of Tim's resourcefulness to get out of his next scrape, which involves some hair-restorer that worked all too well.
Little Tim and the Brave Sea Captain - Things don't go to plan for Tim, the youngest ever sailor, when he stows away on board a steamer!

Edward Ardizzone (1900-1979) was born in 1900. In 1905 his family moved to Ipswich, where he learned to know and love the little coastal steamers that he was to draw so often in the Little Tim books. Illustrator of more than 170 much-loved children's books, Edward Ardizzone was awarded the Kate Greenaway Medal in 1956 and the CBE in 1971. He died in 1979.

Stephen Fry is a national treasure and was born in 1957 in London and brought up in Norfolk. Memorable television appearances included Blackadder, A Bit of Fry & Laurie and Jeeves and Wooster. Big screen outings included Wilde, Gosford Park and Peter’s Friends. He also read all of the Harry Potter books for the unabridged audiobook edtions.

Tim was a small boy who lived in a house by the sea.
Every day, when the weather was fine, he and his best friend, Ginger, would play on the beach.
When the tide was high and the sea came right up to the steep shingle bank, Tim and Ginger would play ducks and drakes by throwing flat pebbles so they skipped across the water.
Ginger was very good at this.
When the tide was low and the sea went far out, they would dig in the sand for lug worms which they sold to the fishermen for bait.
Tim, because he worked harder, always found more worms than Ginger.
However, what Tim liked to do best was to sit and talk with the old boatman who would tell him all about the sea and ships.
This sometimes bored Ginger, who thought he knew everything , though of course he did not.
Poof!” he would say. I have been a sailor boy and know all about the silly old sea.”
Then he would go off and practise playing ducks and drakes and get even better at it than before.
One day, they found the old boatman looking sad and serious.
Ah!” he said. Have you heard about poor Tom, the baker’s son? Went shrimping he did among the rocks under the high chalk cliffs and was caught by the tide. He will never come home no more.”
Then he went on to say that tides were dangerous and that, if they would stop and listen, he would tell them why.
Tim stayed to listen, but Ginger only said, Poof! I know all about the silly old tides,” and went off to play ducks and drakes again.