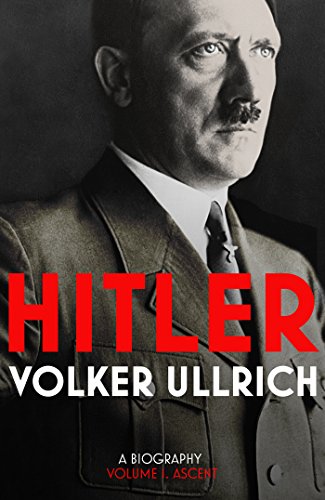 Volker Ullrich is a historian and journalist whose previous books include biographies of Bismarck and Napoleon, as well as a major study of Imperial Germany, The Nervous Superpower 1871-1918. From 1990 to 2009, Ullrich was the editor of the 'Political Book' review section of the influential weekly newspaper, Die Zeit. On publication in Germany in 2013, Hitler: Ascent 1889-1939 became a top ten bestseller.

"Everyone concerned about democracy should read this book." -- Richard J. Evans The Nation "A superb biography of the Fuhrer's pre-war years... It is a tribute to Ullrich's absorbing biography that one contemplates its second volume with a shudder." -- Miranda Seymour Daily Telegraph "[A] fascinating Shakespearean parable about how the confluence of circumstances, chance, a ruthless individual and the wilful blindness of others can transform a country." -- Michiko Kakutani New York Times "A substantial addition to the Fuhrer canon." -- David Aaronovitch The Times, Book of the Year "Where Ullrich adds greatly to our understanding is by making the mercurial, changeable and...profoundly unknowable Hitler believable... This is a major achievement... Impressive and revealing biography." -- Nicholas Stargardt Literary Review "An eye-opening and enlightening re-examination of the life of the German dictator... As well written as it is informative, this moves the debate on Hitler to a new level." -- Roger Moorhouse BBC History Magazine, Book of the Year "If Ullrich's picture fails to present the Fuhrer as a man of depth, it succeeds brilliantly - and so requires to be read as widely as possible - in capturing the instinctive populist." The Times "In a most impressive and massive account, [Volker Ullrich] adds telling details and subtle nuances to the dictator's portrait and provides a fresh perspective on his rise. The result is a must-read book that is bound to be a critical and commercial success." -- Robert Gellately Times Higher Education "[Ullrich] does not go out of his way to belittle his subject and the vulnerabilities he calmly exposes heighten the power of this extraordinary portrait." Sunday Telegraph "I would stipulate emphatically that Trump is not Hitler and the American Republic is not Weimar... Nonetheless there are sufficient areas of similarity in some regards to make the book chilling and insightful reading about not just the past but also the present... If we can still effectively protect American democracy from dictatorship, then certainly one lesson from the study of the demise of Weimar and the ascent of Hitler is how important it is to do it early" -- Christopher R. Browning New York Review of Books