Items related to The Why Axis: Hidden Motives and the Undiscovered Economics...

Gneezy, Uri,List, John The Why Axis: Hidden Motives and the Undiscovered Economics of Everyday Life

The Why Axis: Hidden Motives and the Undiscovered Economics of Everyday Life 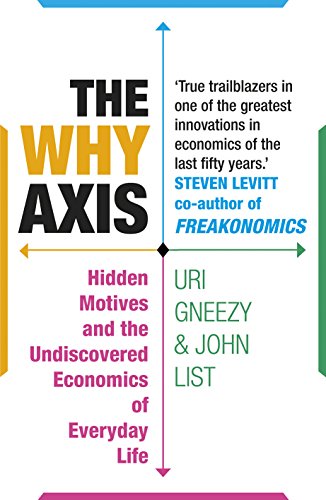 John List is the Homer J. Livingston Professor of Economics at the University of Chicago. He has been a research associate at the National Bureau of Economics (NBER) for more than decade and served as senior economist on the President's Council of Economic Advisors for environmental and resource economics.

READER BIO
Eric is an Earphones Award-winner for his narration of ""Detroit: An American Autopsy."" He has narrated over a dozen audiobooks in both fiction and nonfiction. Eric is also the host and producer of the award-winning ""This American Wife,"" a popular podcast and now webseries that features original comedy and stories, as well as interviews with authors such as Robert Greene, and Amy Tan. He also works as a theatrical producer, and is based in Los Angeles.

The sign on the road in the Khasi hills of northeast India had a puzzling message: Equitable distribution of self-acquired property rights.” We asked Minott, our driver, what it meant.

I do not work in the rice fields, like most men of my tribe,” he told us proudly. I work as a translator. And a driver. And I operate a gas station in my sister’s house. And I trade goods at the market. You see! I work very hard!”

We nodded in agreement. He certainly seemed like a natural-born entrepreneur .But Minott’s life was constricted. Many of the things he wanted to do required his sister’s permission, because in the matrilineal Khasi society, women hold the economic power. The sign on the road, Minott explained, was part of a nascent men’s movement, as the men in Khasi society began to articulate their resentment over being treated as breeding bulls and babysitters.” Here was a parallel universe one we believed might help us solve one of the most vexing economic questions in Western society, inequality between men and women.

3. The Why Axis: Hidden Motives and the Undiscovered Economics of Everyday Life