Items related to Chocolate Nations: Living and Dying for Cocoa in West... 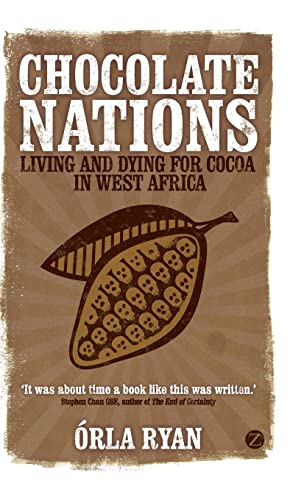 Chocolate is one of the world's most everyday luxuries, the very word conjuring up a hint of the forbidden and a taste of the decadent. Every year, more chocolate is sold in the West even as obesity and health fears grow. Yet the story behind the chocolate bar is rarely one of luxury. The crop provides a lifeline for millions of farmers in West Africa, which produces about 70% of the world's cocoa and is crucial to the economies and politics of Ghana and Ivory Coast. Chocolate Nations examines the causes of farmer poverty, placing the story of these producers in the context of the commodity producers' global battle to make more money from their crops. Mixing economic analysis with the human stories of the African rebels, advertising executives and industry insiders this book tells the compelling story of how chocolate bars get on supermarket shelves.

Orla Ryan is a freelance journalist based in London. She previously worked for the BBC, and as a journalist in Africa. In recent years she worked for Reuters in Ghana, where, among other stories, she covered the West African cocoa sector.

'A captivating read, painting a lively picture of the West African cocoa trade from a variety of perspectives.' Daniel Balint Kurti, Global Witness 'I gave up eating chocolate years ago after seeing at first hand the exploitation that surrounds its production in Africa. Since then, endless panaceas and fair trading schemes have failed to improve the lot of the farmers. It was about time a book like this was written.' Stephen Chan OBE, author of The End of Certainty 'That Mmmmoment when our lips meet the meltilicious chocolate bar we've been waiting for all day ... well, it could be the last bite we take of it that tastes right after reading this expose of the cocoa industry. "Fair trade" is a great feelgood advertising line, but it is often a contradiction in terms. Not much profit trickles down from the shelves of our shops to the farmers and child labour (in reality, trafficked or slave labour, Ryan says) of Ghana and Ivory Coast whose poverty is covered up by weasel words from trade associations and financial interests glibly defending exploitation and profiteering.' The Times 'A fascinating account of the struggles of cocoa producers in West Africa, almost all of them smallholders, and what it takes to turn a crop of cocoa into a warehouse full of Ferrero Rocher.' The Guardian 'Paints a disturbing and subtle picture of an industry few chocolate consumers think about.' Sydney Morning Herald 'Arresting and provocative. The author's interviews with labourers movingly illuminate the struggles that lie behind an icon of western indulgence.' Financial Times 'Presents the tragic and shocking detail behind the world's favourite confectionery.' New Agriculturist 'A courageous and thoughtful account of a murky industry.' Times Literary Supplement

1. Chocolate Nations : Living and Dying for Cocoa in West Africa

Book Description Hardback. Condition: New. Language: English. Brand new Book. Chocolate - the very word conjures up a hint of the forbidden and a taste of the decadent. Yet the story behind the chocolate bar is rarely one of om the thousands of children who work on plantations to the smallholders who harvest the beans, Chocolate Nations reveals the hard economic realities of our favourite sweet. This vivid and gripping exploration of the reasons behind farmer poverty includes the human stories of the producers and traders at the heart of the West African industry. Orla Ryan shows that only a tiny fraction of the cash we pay for a chocolate bar actually makes it back to the farmers, and sheds light on what Fair Trade really means on the ground.Provocative and eye-opening, Chocolate Nations exposes the true story of how the treat we love makes it on to our supermarket shelves. Seller Inventory # APC9781848130043

6. Chocolate Nations : Living and Dying for Cocoa in West Africa

8. Chocolate Nations: Living and Dying for Cocoa in West Africa

Book Description Hardback. Condition: New. New copy - Usually dispatched within 4 working days. Chocolate - the very word conjures up a hint of the forbidden and a taste of the decadent. Yet the story behind the chocolate bar is rarely one of luxury. From the thousands of children who work on plantations to the smallholders who harvest the beans, this title reveals the hard economic realities of our favourite sweet. Seller Inventory # B9781848130043

Shipping: US$ 16.69
From United Kingdom to U.S.A.
Destination, rates & speeds