Items related to Notes of a Russian Sniper

Notes of a Russian Sniper 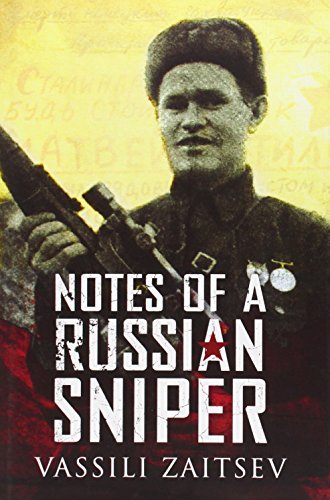 ‘As a sniper, I’ve killed more than a few Nazis. I have a passion for observing enemy behavior. You watch a Nazi officer come out of a bunker, acting all high and mighty, ordering his soldiers every which way, and putting on an air of authority. The officer hasn’t got the slightest idea that he only has seconds to live.’

Vassili Zaitsev’s account of the hell that was Stalingrad is moving and harrowing. This was a battle to the death – fighting street by street, brick by brick, living like rats in a desperate struggle to survive. Here, the rules of war were discarded and a psychological war was being waged. In this environment, the sniper was king – an unseen enemy who frayed the nerves of brutalized soldiers.

Zaitsev volunteered to fight at Stalingrad in 1942. His superiors recognized quickly his talent, and made him a sniper. He adapted his hunting skills to the ruins of the city, watching his prey with nerves of steel. In his first 10 days, Zaitsev killed 40 Germans. He achieved at least 225 kills and the tactics he developed are still being studied.

Zaitsev was used a symbol of Russian resistance against the Nazis. His exploits, including a famous ‘duel’ with a Nazi sniper, remain the stuff of legend. His account is absorbing to anyone interested in World War II and seeing how one person could survive in the most extreme of conditions.

Vassili Zaitsev was born in 1915, and spent his early life as a hunter in the Urals. He joined the Russian navy in 1937, and volunteered for Stalingrad after hearing about the appalling losses. Zaitsev’s mastery as a sniper became legendary, and he was awarded several times for his skill, including the coveted gold star of the Hero of the Soviet Union. He died in 1991.

“...gives an on-the-ground account of what it was like to be one of Stalingrad's defenders... Both moving and harrowing, this book will appeal to any reader interested in the Second World War.” (Book News, Inc.)

“Much has been written about the Battle for Stalingrad, but nothing as interesting as this volume by a sniper who was wounded several times, buried alive in a sealed bunker with a number of dead Russian soldiers, and given the permission to start a school for snipers.” (Gun Week)

“...Zaitsev’s legendary efforts made him a symbol of Russian resistance against the Nazi’s, and his own words reveal how a dedicated and determined man could hold out and fight back even in the most severe situations...highly recommended especially for college library, military history, and military biography collections. “ (Midwest Book Review)

1. Notes of a Russian Sniper

2. Notes of a Russian Sniper

3. NOTES OF A RUSSIAN SNIPER