Items related to Fighting in Hell: The German Ordeal on the Eastern... 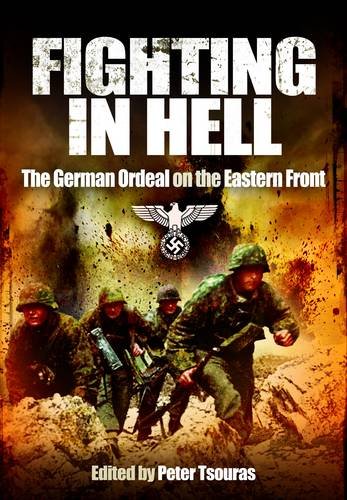 On 22 June 1941, the German army invaded the Soviet Union, one hundred fifty divisions advancing on three axes in a surprise attack that overwhelmed and destroyed whatever opposition the Russians were able to muster. The German High Command was under the impression that the Red Army could be destroyed west of the Dniepr River and that there would be no need for conducting operations in cold, snow, and mud. They were wrong.

In reality, the extreme conditions of the German war in Russia were so brutal that past experiences simply paled before them. Everything in Russia -- the land, the weather, the distances, and above all the people -- was harder, harsher, more unforgiving, and more deadly than anything the German soldier had ever faced before.

Based on the recollections of four veteran German commanders of those battles, Fighting in Hell describes in detail what happened when the world's best-publicized "supermen" met the world's most brutal fighting. It is not a tale for the squeamish.

Peter G. Tsouras is an historian who retired from the Defense Intelligence Agency, where he was a senior intelligence officer. He also served with the 1st Battalion, 64th Armor, in Germany. Tsouras is the author or editor of twenty-two books on military operations and alternate history.

1. FIGHTING IN HELL : THE GERMAN ORDEAL ON THE EASTERN FRONT

Shipping: US$ 19.61
From United Kingdom to U.S.A.
Destination, rates & speeds