Items related to The Rough Guide to Britain

The Rough Guide to Britain 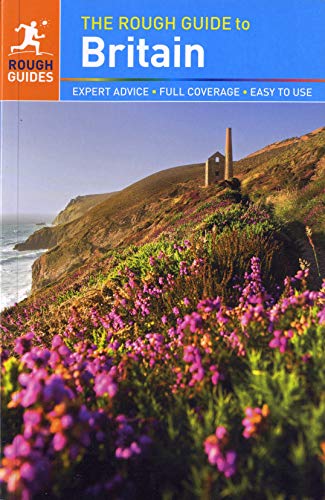 The Rough Guide to Britain is the definitive guide to England, Wales and Scotland. A 28-page, full-colour section introduces Britain''s highlights with incisive reviews of all the best places to stay, eat, drink and party - plus new ''author''s picks'' to highlight the very best options. The guide includes informed accounts of all the top sights from the Tate Modern in London and The Baltic Centre in Newcastle to the National Museum of Wales and the picturesque Scottish coast. There are plenty of practical tips on exploring the great British countryside from the rugged Pembrokshire coastline to the beautiful valleys of the Yorkshire Dales. The guide also takes a detailed look at Britain''s culture, politics, history and wildlife. This revised edition includes three brand-new, full-colour inserts: ''Festivals'', ''The Coast'' and ''Beer & Pubs''. The guide comes complete with maps and plans for every region.

To get to grips with England, London is the place to start. Nowhere else in the country can match the scope and innovation of the metropolis, a colossal, frenetic city, perhaps not as immediately attractive as its European counterparts, but with so much variety that lack of cash is the only obstacle to a great time. It's here that you'll find England's best spread of nightlife, cultural events, museums, galleries, pubs and restaurants. The other large cities, such as Birmingham, Newcastle, Leeds, Manchester and Liverpool, lack the capital's glamour, but each of these regional cities has its strengths - for example, a resurgent arts scene in Birmingham, or the brilliant clubs in Manchester.

To be honest, though, the regional centres don't rank among the most alluring of destinations for many tourists, and they come a long way behind ancient cities such as Lincoln, York, Salisbury, Durham and Winchester - to name just those with the most celebrated of England's cathedrals - for sheer physical beauty. Left adrift by the industrialization of the last century and spared the worst of postwar urban development, these cities remain small-scale and manageable, more hospitable than the big commercial and industrial centres. Most beguiling of all are the long-established villages of England, hundreds of which amount to nothing more than a pub, a shop, a gaggle of cottages and a farmhouse offering bed and breakfast - Devon, Cornwall, the Cotswolds and the Yorkshire Dales harbour some especially picturesque specimens, but every county can boast a decent showing of photogenic hamlets.

Evidence of England's pedigree is scattered between its settlements as well. Wherever you're based, you're never more than a few miles from a ruined castle, a majestic country house, a secluded chapel or a monastery, and in some parts of the country you'll come across the sites of civilizations that thrived here before England existed as a nation. In the southwest there are remnants of a Celtic culture that elsewhere was all but eradicated by the Romans, and from the south coast to the northern border you can find traces of prehistoric settlers - the most famous being the megalithic circles of Stonehenge and Avebury.

Then, of course, there's the English countryside, an extraordinarily diverse terrain from which Constable, Turner, Wordsworth, Emily Bront and a host of other native luminaries took inspiration. Most dramatic and best known are the moors and uplands - Exmoor, Dartmoor, Bodmin Moor, the North York Moors and the Lake District - each of which, especially the Lakes, has its over-visited spots, though a brisk walk will usually take you out of the throng.

Although the Welsh capital, Cardiff, boasts most of the national institutions, including the National Museum and St Fagan's Folk Museum, the essence of Wales' appeal lies outside the towns, where there is ample evidence of the warmongering which has shaped the country's development. Castles are everywhere, from hard little stone keeps of the early Welsh princes to Edward I's incomparable fortresses such as Conwy, Beaumaris, Caernarfon and Harlech. Passage graves and stone circles offer a link to the pre-Roman era when the priestly order of Druids ruled over early Celtic peoples, and great medieval monastic houses - like ruined Tintern Abbey - are not that difficult to find. All these attractions are enhanced by the beauty of the wild Welsh countryside. The backbone of the Cambrian Mountains terminates in the soaring peaks of Snowdonia National Park and the angular ridges of the Brecon Beacons, both superb walking country and both national parks. A third national park follows the Pembrokeshire Coast, and much of the rest of the coast remains unspoilt, though long sweeps of sand are often backed by traditional British seaside resorts: the north Wales coast, the Cambrian Coast and the Gower Peninsula are home to many.

The majority of visitors begin their tour of Scotland in the capital, Edinburgh, a handsome and ancient city famous for its magnificent castle and the Palace of Holyroodhouse, as well as for the excellence of its museums - not to mention the Edinburgh International Festival, a world-acclaimed arts shindig held for three weeks in August and early September. From here it's just a short journey west to the capital's rival, Glasgow, a sprawling industrial metropolis that was once the second city of the British Empire. Though its industrial base remains in decline, Glasgow has done much to improve its image in recent years, making the most of the impressive architectural legacy of its late eighteenth- and nineteenth-century heyday - a rejuvenation that has generated a brisk tourist trade.

Southern Scotland, often underrated, features some gorgeous scenery, but nothing quite to compare to the shadowy glens and well-walked hills of the Trossachs, nor to the Highlands, whose multitude of mountains, sea cliffs, glens and lochs cover the northern two-thirds of the country. Inverness is an obvious base for exploring the region, although Fort William, at the opposite end of the Great Glen close by Ben Nevis, Scotland's highest peak, is a possible alternative. Britain's most thrilling wilderness experiences are to be had here and on the Scottish islands, the most accessible of which extend in a long rocky chain off Scotland's Atlantic coast, from Arran, through Skye (the most visited of the Hebrides) to the Western Isles, where the remarkably hostile terrain harbours some of the last bastions of the Gaelic language. At Britain's northern extreme lie the sea- and wind-buffeted Orkney and Shetland islands, whose rich Norse heritage makes them distinct in dialect and culture from mainland Scotland, while their wild scenery offers some of Britain's finest bird watching and some stunning archeological remains.

1. The Rough Guide to Britain

2. The Rough Guide to Britain

3. THE ROUGH GUIDE TO BRITAIN

4. The Rough Guide to Britain