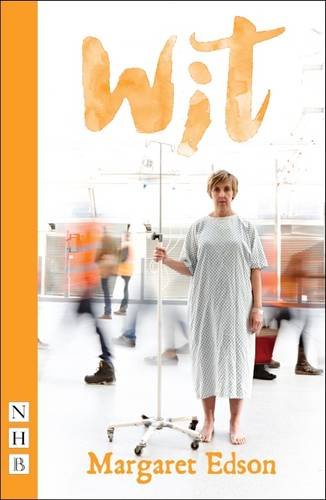 Review:
Wit is that rare beast: art that engages both the heart and the mind. "It is not my intention to give away the plot," Vivian Bearing, Ph.D., announces near the beginning of Margaret Edson's Pulitzer Prize-winning play, "but I think I die at the end. They've given me less than two hours." For two hours, this famed Donne scholar takes center stage, interrupting her doctors, nurses, and students to explicate her own story, its metaphors and conceits. Recently diagnosed with late-stage ovarian cancer, she is being treated with an experimental drug cocktail administered in "eight cycles. Eight neat little strophes." The chemo makes her feel worse than she ever thought possible; in fact, the treatment is making her sick, not the disease--an irony she says she'd appreciate in a Donne sonnet, if not so much in life.

Throughout, Vivian finds, the doctors study and discuss her body like a text: "Once I did the teaching, now I am taught. This is much easier. I just hold still and look cancerous. It requires less acting every time." As her time draws to a close, a sea change begins to work in the way Vivian thinks about life, death, and indeed, Donne. His complex, tightly knotted poems have always been a puzzle for her formidable intellect, a chance to display "verbal swordplay" and wit. Her sickness presents an entirely different challenge. A powerful, prickly personality, capable of dry asides even during a bout of gut-wrenching nausea ("You may remark that my vocabulary has taken a turn for the Anglo-Saxon"), Vivian develops a new appreciation for the simple, the maudlin, the kind. Not to give away the plot, but the final moments in Margaret Edson's debut are as wrenching--as human--as anything in recent drama. --Mary Park

Book Description Paperback. Condition: Good. Minor shelf wear Good condition is defined as: a copy that has been read but remains in clean condition. All of the pages are intact and the cover is intact and the spine may show signs of wear. The book may have minor markings which are not specifically mentioned. Most items will be dispatched the same or the next working day. Seller Inventory # wbb0018709199

Book Description Paperback. Condition: Very Good. Very Good: a copy that has been read, but is in excellent condition. Pages are intact and not marred by notes or highlighting. The spine remains undamaged. Most items will be dispatched the same or the next working day. Seller Inventory # wbb0021477478