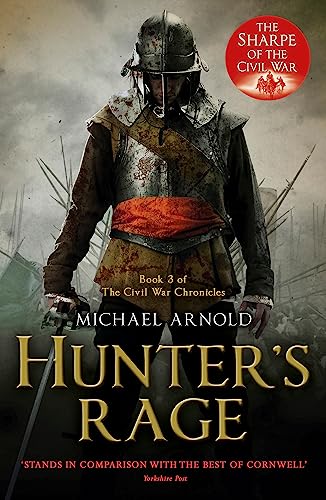 Hunter's Rage , the third in The Civil War Chronicles , Michael Arnold's acclaimed series of historical thrillers, sees battle-scarred hero Captain Stryker, 'the Sharpe of the Civil War', take on his oldest foe. 'Stands in comparison with the best of Cornwell' Yorkshire Post Posted to the hostile territory of Dartmoor, Captain Innocent Stryker and his men are attacked by an elite cavalry unit commanded by the formidable Colonel Gabriel Wild and suffer heavy losses. Stryker has already clashed once with Wild, and the Roundhead has sworn to seek his revenge. After the attack, Stryker is faced with the annihilation of his company as he is hounded across the moor, eventually seeking shelter on an isolated tor populared by an enigmatic former priest who harbours no love for the King's cause. Colonel Wild is assisted in his revenge by Osmyn Hogg, Parliamentarian Witchfinder, who shares his own deadly history with Stryker. To save his honour and his life, Stryker must lead his men to glory from the protection of the lonely granite-topped hill. Into this atmosphere of intrigue and danger comes the beautiful but mysterious Cecily Cade. Stryker comes to her aid, unaware that she carries with her special knowledge that may prove the key to Royalist victory. The battle between Stryker and his old foes takes him from the bleak isolation of Dartmoor, through the war-ravaged lands of southern England and finally to Stratton, where the bloody battle between Cornwall and Devon will decide the fate of the south-west.

Michael Arnold lives in Hampshire with his wife and young son. His childhood holidays were spent visiting castles and battlefields, but his fascination with the civil wars was piqued partly by the fact that his hometown and region of Hampshire are steeped in civil war history.

Fans of Cornwell's Sharpe novels will love Captain Innocent Stryker - he's uglier, meaner and cleverer than Sharpe. Tremendous! -- Ben Kane A dark-hued romp, livid with the scents, sounds and colours of a country on the brink of implosion ... impressive. * Daily Express * Michael Arnold's Civil War Chronicles have the makings of a fun, Sharpe-like series. * History Today *