Items related to Dallas: 1963: The Road to the Kennedy Assassination

Dallas: 1963: The Road to the Kennedy Assassination 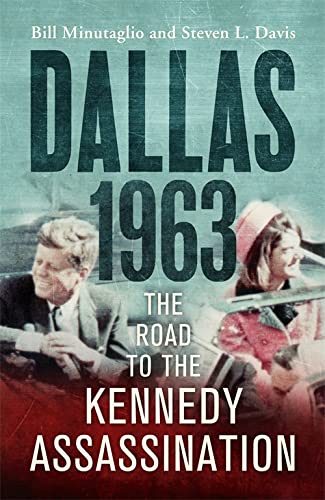 In November 1963 President John F. Kennedy was assassinated in Dallas, Texas. His death remains a defining moment for millions of people but few understand the unstoppable forces that were building in the city long before this dramatic event played out before the world. Dallas 1963 is a riveting account of the convergence of a group of unyielding and highly focused protagonists in a city sometimes seemingly filled with hate for JFK. Wicked stabs of fate and circumstance steered these fascinating characters together: the richest man in the world, a combative military general, a Mafia don, a strident Congressman, thundering preachers and even the elegant owner of one of America's most famous stores. This book expertly narrates how the spiralling events surrounding these characters on the ground in Dallas ultimately brewed a toxic environment before the President's assassination. Using a wealth of new information, as well as the first ever examination of key primary documents, Bill Minutaglio and Steven L. Davis, both experts in their field, provide a comprehensive and detailed portrait of the place, the time and the people of these extraordinary events in American history. They also provide cautionary and controversial lessons rendering this time increasingly relevant for the modern age.

Bill Minutaglio is the author of several acclaimed books, including the first major biography of President George W. Bush. His book, City on Fire, was named one of the 'greatest tales of survival' ever written by Esquire. His work has appeared in the New York Times, Newsweek, the Bulletin of the Atomic Scientists, Scotland on Sunday, the Daily Beast and many other publications. He is a professor of journalism at the University of Texas-Austin. Steven L. Davis was born in 1963 and grew up in Dallas, Texas. He is the author of two books: Texas Literary Outlaws: Six Writers in the Sixties and Beyond and J. Frank Dobie: A Liberated Mind. Davis is a long-time curator at the Wittliff Collections at Texas State University-San Marcos, which holds the literary papers of many writers. Davis has also edited several books for publication and he is a member of the Texas Institute of Letters.

Bill Minutaglio and Steven L. Davis's Dallas 1963 is a brilliantly written, haunting eulogy to John F Kennedy. By exposing the hatred aimed at our 35th president, the authors demonstrates that America - not just Lee Harvey Oswald - was ultimately responsible for his death. Every page is an eye opener. Highly recommended! Douglas Brinkley, professor of history at Rice University and author of Cronkite All the great personalities of Dallas during the assassination come alive in this superb rendering of a city on a roller coaster into disaster. History has been waiting fifty years for this book Lawrence Wright, author of The Looming Tower and Going Clear After fifty years, it's a challenge to fashion a new lens with which to view the tragic events of November 22, 1963 - yet Texans [Minutaglio and Davis] pull it off brilliantly Publishers Weekly Chilling ... The authors make a compelling, tacit parallel to today's running threats by extremist groups Kirkus A thoughtful look at the political and social environment that existed in Dallas at the time of the president's election ... a climate, the authors persuasively argue, of unprecedented turmoil and hatred Booklist An intriguing exploration ... Although the authors don't specifically point the finger at Oswald or anyone else, they contend that it was Dallas's toxic, extremist environment that made an act of violence there against the president almost inevitable Sunday Times Casting a clinical eye over the events leading to the death that shook the world in November 1963, the acclaimed Texas journalists superbly put the shocking season at Dealey plaza into context ... Countless attempts have been made to explain the Kennedy assassination, but few have ever tried to explain the city where it happened. For any politics or history buff, this slow-burning non-fiction thriller is a must Irish Examiner

1. Dallas: 1963: The Road to the Kennedy Assassination

Shipping: US$ 17.95
From United Kingdom to U.S.A.
Destination, rates & speeds