Items related to The Winter Men 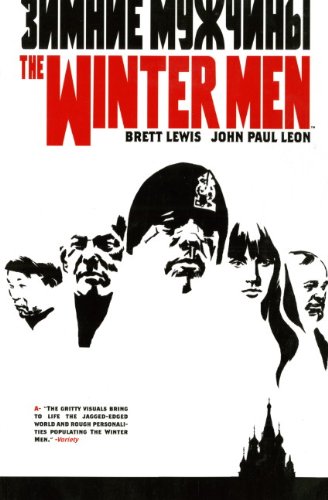 In the modern, post-collapse Soviet Union, criminal gangs rule under the aegis of a crumbled government, and old soldiers roam the streets...as do old superheroes. One such man is Kris Kalenov, a former member of the Russian elite military force 'Red 11', now a Moscow policeman. Caught up in a kidnapping case, Kalenov encounters the dark heart of the New Russia at every turn, bringing him into conflict and allegiance with friends and enemies alike as he searches for both a missing girl, and the secret of the Soviet super-project codenamed 'Winter'. Author Brett Lewis and artist John Paul Leon ("Static") present a tour-de-force graphic novel soaked in vodka, blood and sweat. Warning: This title is for adults only!

Brett Lewis is a freelance writer and consultant living in the Los Angeles area. The WInter Men is his first comic. John Paul Leon is an acclaimed artist whose work includes Batman, Earth-X, Static, Superman and X-men.

Lewis and Leon postulate that the Soviet Union developed a supersoldier before it imploded—just one, which was abetted with special forces individually encased in “rocket-tanks”; the “tankmen,” it’s hinted, were biotechnologically enhanced, too. The supersoldier disappeared, but five former tankmen remain. Kris Kalenov, now one of Moscow’s finest, gets specially assigned by the mayor when a little girl with a transplanted liver is kidnapped. The organ confers some supercapabilities on the child, including being able, when grown, to bear a supersoldier, thereby launching a new race. Kris contacts fellow ex-tankmen Drost, an army “rapid reaction corps” commander; disarmingly gorgeous bodyguard Nina; and Nikki, a gangster, and the game’s afoot. Played out in the context of “Mafiya” gang warfare and ex–secret police faction-fighting, it’s graveyard-humorous, lethally tough, and curiously sluggish; its best sequence is an interlude in which Kris takes Nikki along for a day of ordinary police work just for, uh, laughs. Leon’s glorious, mercurial comics-realist artwork almost completely compensates for the script’s lack of zest. --Ray Olson