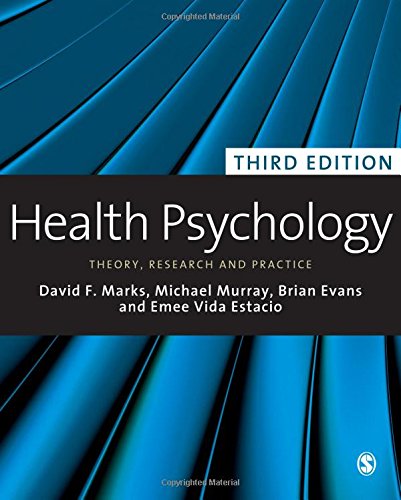 Retaining the celebrated critical approach that has been a hallmark of this book, the Third Edition now incorporates research from a fuller range of perspectives including more mainstream, evidence-based approaches. The book continues to offer more community psychological and sociological viewpoints on disease prevention and health promotion than any other textbook for this course.

Key features of the third edition include four brand new chapters in the book on Theories, Models and Interventions Aplied to Sexual Helth; Information and Communication; Health Literacy; Community and Alternative Approaches, extensive pedagogical features, including chapter outlines and summaries of key ideas, and guidelines for further research. Boxed case studies, tables and figures and cutting edge research are integrated throughout to aid students′ understanding of this fascinating field; a new accompanying companion website with a full suite of instructor materials and online readings for students.

DAVID F. MARKS served as Head of the School of Psychology at Middlesex Polytechnic, and as Head of the Department of Psychology at City University, London, UK.  Previously David held positions at the University of Sheffield, UK, and at the University of Otago, New Zealand. His other books include The Psychology of the Psychic (1980, with R. Kammann), Theories of Image Formation (1986), Imagery: Current Developments (1990, with J.T.E. Richardson and P. Hampson), The Quit For Life Programme: An Easier Way to Stop Smoking and Not Start Again (1993), Improving the Health of the Nation (1996, with C. Francome), Dealing With Dementia: Recent European Research (2000, with C.M. Sykes), The Psychology of the Psychic (Revised Edition) (2000), The Health Psychology Reader (2002), Research Methods for Clinical and Health Psychology (2004, with L. Yardley), and Overcoming Your Smoking Habit (2005). David is the Editor of the Journal of Health Psychology and Health Psychology Open.

BRIAN EVANS is a Visiting Lecturer at Middlesex University, UK, having previously served there as programme leader of the MSc degree in Health Psychology. Brian has also held positions at City University and the University of Sussex, UK, and at Concordia University, Montreal, Canada. He is interested in the analysis of psychological research and theory in its socio-political context and his previous publications include IQ and Mental Testing: An Unnatural Science and Its Social History (1981, with B. Waites). Brian is an Editorial Board member of the Journal of Health Psychology.

EMEE VIDA ESTACIO is a Lecturer in Psychology at Keele University. She completed her Bachelor’s degree in psychology (magna cum laude) at the University of the Philippines and her MSc and PhD in health psychology at City University London. Emee specializes in health promotion and community development and has facilitated action research projects in some of the most deprived areas in the UK and in the Philippines.  As a scholar activist, she became actively involved in supporting activities for Oxfam, the Association for International Cancer Research, CRIBS Philippines and Save the Children UK. Emee is a steering group member of Health Literacy UK and sits on the editorial board of the Journal of Health Psychology, Health Psychology Open, Community, Work and Family, and the Philippine Journal of Psychology. Review:

'The book provides an excellent foundation to health psychology. It brings readers up to date with past controversies and current difficulties and suggests areas for further research to promote positive health behaviours and a healthy nation' - Janette C Allotey, Nurse Researcher `This text provides a useful and refreshing addition to health psychology texts with a very applied social, and cultural focus. It would make a useful addition to any undergraduate or Masters course in health psychology' -British Journal of Health Psychology