Items related to TV Horror: Investigating the Dark Side of the Small... 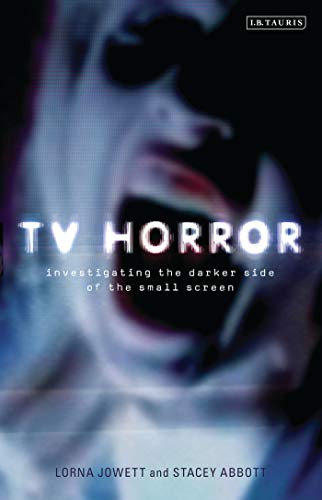 Horror is a universally popular, pervasive TV genre, with shows like True Blood, Being Human, The Walking Dead and American Horror Story making a bloody splash across our television screens. This complete, utterly accessible, sometimes scary new book is the definitive work on TV horror. It shows how this most adaptable of genres has continued to be a part of the broadcast landscape, unsettling audiences and pushing the boundaries of acceptability.The authors demonstrate how TV Horror continues to provoke and terrify audiences by bringing the monstrous and the supernatural into the home, whether through adaptations of Stephen King and classic horror novels, or by reworking the gothic and surrealism in Twin Peaks and Carnivale. They uncover horror in mainstream television from procedural dramas to children's television and, through close analysis of landmark TV auteurs including Rod Serling, Nigel Kneale, Dan Curtis and Stephen Moffat, together with case studies of such shows as Dark Shadows, Dexter, Pushing Daisies, Torchwood, and Supernatural, they explore its evolution on television. This book is a must-have for those studying TV Genre as well as for anyone with a taste for the gruesome and the macabre.

Lorna Jowett is Reader in Television Studies at the University of Northampton, where she teaches some of her favourite things, including horror, science fiction and television. She is the author of Sex and the Slayer: A Gender Studies Primer for the Buffy Fan (2005) and recent publications cover Angel, Supernatural, Pushing Daisies and representation in cult television.Stacey Abbott is Reader in Film and Television Studies at the University of Roehampton and is the author of Celluloid Vampires (2007) and the editor of The Cult TV Book (I.B. Tauris, 2010). Recent publications cover Angel, Alias, Supernatural, Dexter, True Blood and Torchwood. She is General Editor of the Investigating Cult TV Series at I.B.Tauris.

From Twin Peaks to Buffy the Vampire Slayer, and Dark Shadows to The Simpsons, check the index with the lights on, because your favorite show is probably lurking in here somewhere. This thorough, thoughtful and entertaining look at horror on television deserves to be devoured by writers, analysts and fans. You will definitely find something in here to make your pulse jump and your eyes open wide.' Jane Espenson, writer/producer: Buffy the Vampire Slayer, Battlestar Galactica, Game of Thrones, Once Upon a Time. 'Alert to horror's histories and hybridities on TV, Lorna Jowett and Stacey Abbott cast a forensic gaze over this previously dark continent. From aesthetics to "kitchen sink gothic" to monster fans, TV Horror bristles with brilliant ideas and analyses a wealth of examples. Then: horror on TV was often dismissed as all sizzle and no steak. Now: challenging old debates over authenticity, Jowett and Abbott prove themselves to be the new (scholarly) masters of horror.' Matt Hills, author of The Pleasures of Horror and Triumph of a Time Lord.

1. TV Horror: Investigating the Darker Side of the Small Screen