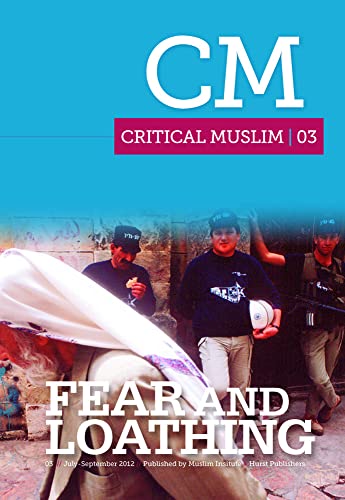 AbdelWahab El-Affendi on Islamophobia and Orientalism in the age of liberal paranoia, Arun Kundnani on English Defense League and the rise of the far right in Europe, Vinay Lal on Hindus who love Hitler, Gordon Steffey on Christian fundamentalism, Fanar Haddad on the sectarian schisms in the Arab world, Gary McFarlane on Tottenham Riots, Farouk Peru on self loathing Muslims, Claire Chambers on 'Four Lions', Peter Clark on Bernard Lewis and Peter Moray on Irshad Manji.

Plus a short story by Suhel Ahmed, six poems by Stéphane Chaumet, Anita Sethi's dangerous bus ride through Iran, Ten Top Techs for Muslim and Ziauddin Sardar on his pet hate: the beards of Islam.

Ziauddin Sardar is a renowned writer, broadcaster and cultural critic. A former columnist on the New Statesman, he has also served as a Commissioner on the Equality and Human Rights Commission. He is the editor of Futures and Visiting Professor, School of Arts, The City University, London. He is the author of many books, the most recent being Desperately Seeking Paradise: Journeys of a Sceptical Muslim (Granta); What Do Muslims Believe? (Granta); and Balti Britain: A Provocative Journey Through Asian Britain (Granta).

Robin Yasin-Kasab, co-editor of Critical Muslim, is the author of the acclaimed novel, The Road From Damascus (Penguin). Born in west London, he has lived and worked in France, Pakistan, Turkey, Syria, Morocco, Saudi Arabia and Oman. He is a regular contributor to the literary pages of The Guardian and The Independent.