Items related to The Fall of English France 1449–53 (Campaign) 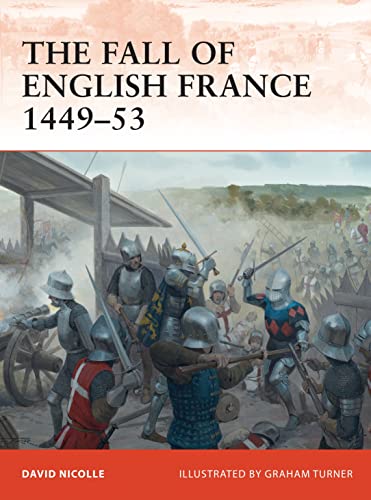 For the overwhelming majority of people outside the French-speaking world the Hundred Years War consisted of a sequence of major English victories, above all Crécy, Poitiers and Agincourt. The only significant victor or 'hero' on the French side was Joan of Arc, and she ended up being burned at the stake. Yet somehow the war ended in a French victory and with England's martial energies being turned against itself in the Wars of the Roses. This book is intended to provide some balance. It will describe the campaign that brought the Hundred Years War to a close, with English possessions being confined to Calais and the Channel Islands. It will also explain how the somewhat unprepossessing and unmartial King Charles VII of France succeeded where his predecessors had failed. The campaign consisted of more than battles, of course, but it was marked by two major victories - at Formigny in 1450 and at Castillon in 1453. Formigny is of special interest because it saw French cavalry defeat English archers, in effect a reversal of Crécy, Poitiers and Agincourt, and could be interpreted as one of the last 'medieval' battles. Castillon is of interest because it was a victory of gunpowder artillery in fixed positions over a traditional medieval assault by mixed infantry and cavalry, and thus could be interpreted as one of the first 'modern' battles.

Born in 1944, David Nicolle worked in the BBC's Arabic service for a number of years before gaining an MA from the School of Oriental and African Studies, London, and a doctorate from Edinburgh University. He has written numerous books and articles on medieval and Islamic warfare, and has been a prolific author of Osprey titles for many years.

“...provides a fine narrowed focus on the battles of Formigny and Castillon which represented a change in how warfare was perceived and fought, and is a pick for any collection strong in medieval European history.” ―James A. Cox, The Midwest Book Review (August 2012)

Book Description Bloomsbury, 2020. Paperback. Condition: NEW. 9781849086165 This listing is a new book, a title currently in-print which we order directly and immediately from the publisher. Print on Demand title, produced to the highest standard, and there would be a delay in dispatch of around 10 working days. For all enquiries, please contact Herb Tandree Philosophy Books directly - customer service is our primary goal. Seller Inventory # HTANDREE01006438

Book Description Osprey Publishing, Oxford, 2012. Soft Cover. Condition: Brand New. No Jacket. Graham Turner (illustrator). First Edition. [2012] Brand New First Edition First Printing of Campaign 241. 96pp. Ilstd. with b/w & col. plts by Graham Turner. Despite the great English victories at Crécy, Poitiers and Agincourt, the French eventually triumphed in the Hundred Years War. This book examines the last campaign of the war, covering the great battles at Formigny in 1450 and Castillon in 1453, both of which hold an interesting place in military history. The battle of Fornigny saw French cavalry defeat English archers in a reverse of those earlier English victories, while Castillon became the first great success for gunpowder artillery in fixed positions. Finally, the book explains how the seemingly unmartial King Charles VII of France all but drove the English into the sea, succeeding where so many of his predecessors had failed. Pictorial card covers. Clean; bright; tight; unmarked. For full appreciation see pictures. Order with confidence - trusted seller with excellent customer feedback. [MAELDUNE ANTIQUARIAN HAS BEEN ESTABLISED SINCE 1969] as. Seller Inventory # 029280