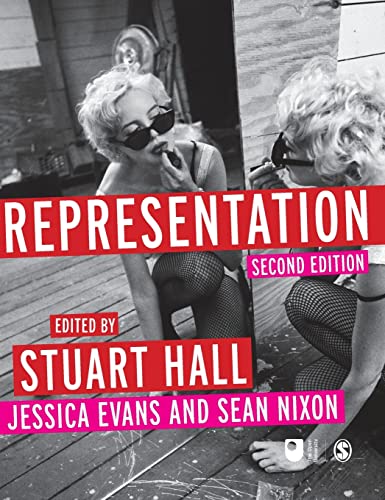 Since 1997 Representation has been the key go-to textbook for students learning the tools to question and critically analyze institutional and media texts and images. This long-awaited Second Edition:

· addresses the emergence of new technologies and formats of representation, from the internet and the digital revolution to reality TV

· includes an entirely new chapter on celebrity culture and personalisation, to debates about representation and democracy, and involve illustrations of an intertextual nature, cutting across various technologies and formats in which ′the real′ or the authentic makes an appearance

This book will once again prove an indispensible resource for students and teachers in cultural and media studies.

Stuart Hall was born and raised in Jamaica and arrived in Britain on a Rhodes scholarship to Oxford in 1950. In 1958, he left his PhD on Henry James to found the New Left Review, which did much to open a debate about immigration and the politics of identity. Along with Raymond Williams and Richard Hoggart he established the first Cultural Studies programme at a British university in Birmingham in 1964, bringing the study of popular culture into the understanding of political and social change.

After spending more than four decades as one of the UK’s leading public intellectuals, Hall retired from formal academic life in 1997 and since then has continued to devote himself to questions of representation, creativity and difference. He became the chair of two foundations, Iniva, the Institute of International Visual Arts, and Autograph ABP, which seeks to promote photographers from culturally diverse backgrounds, and championed the opening of Iniva’s new Rivington Place arts complex in east London in 2007. Review:

This is simply a magnificent collection of chapters, laced together under the guiding light of Stuart Hall′s outstanding scholarship. The chapters each exemplify the very best modes of cultural studies writing, theoretically informed, lucid, vividly alive and relevant to students and to general readers across the arts, humanities and social sciences. New material by Stuart Hall is particularly welcome, and will be much appreciated given his key role in the development of post-colonial as well as cultural studies. In particular we see Hall lay out the conceptual groundwork for an extensive study of the media from the viewpoint of ′race′ and ethnicity.
Angela McRobbie
Professor of Communications, Goldsmiths, University of London

The second edition of Representation should enable it to speak to new generations of students and to continue to serve as the authoritative introduction to the theories and politics of meaning and representation in cultural studies. Anyone interested in these matters, whether student, teacher or simply curious intellect, will be glad for the time spent reading this book.
Lawrence Grossberg
University of North Carolina Chapel Hill, Senior Editor of the journal Cultural Studies

Shipping: US$ 20.49
From United Kingdom to U.S.A.
Destination, rates & speeds

Shipping: US$ 34.18
From United Kingdom to U.S.A.
Destination, rates & speeds

Shipping: US$ 16.34
From United Kingdom to U.S.A.
Destination, rates & speeds

Shipping: US$ 47.85
From United Kingdom to U.S.A.
Destination, rates & speeds