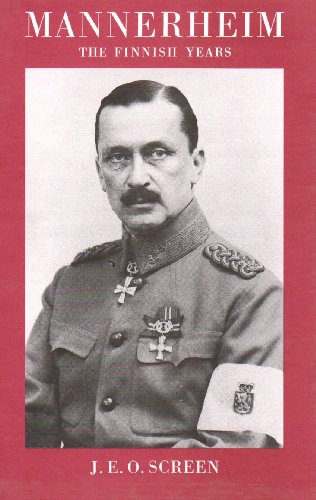 As soldier and statesman Gustaf Mannerheim (1867-1951) occupies a unique place in the history of Finland. He served as commander-in-chief in 1918 and 1939-44, as regent in 1919 and as president of the republic in 1944-6. He was a controversial figure, particularly to the left, following his role in 1918 in suppressing the Finnish revolution which followed the Bolshevik Revolution in Russia. As a determined opponent of communism he made efforts to promote intervention against the Bolsheviks in Petrograd in 1918-20, but failed.
The passage of time turned him from a hero of the right into a trusted national figure, while his leadership of Finnish resistance to Soviet aggression in the Winter War of 1939-40 won him international fame. In 1941 he hoped that Germany would destroy the Soviet Union, and Finland fought against the Soviets as a co-belligerent to Hitler's Reich. Consequently Finland was forced to accept harsh armistice terms in 1944. Only Mannerheim's authority held the nation together as the painful adjustment to a new relationship with the Soviet Union began.
This book is the continuation of the author's study of Mannerheim's service in the imperial Russian army, and describes the transformation of Mannerheim from a 'Russian' general into a Finnish statesman and patriot. It sets his Finnish career in its historical context, examines his complex character, and sums up his legacy.

J. E. O. Screen was Librarian of the School of Slavonic and East European Studies, University of London, from 1972 to 1998.