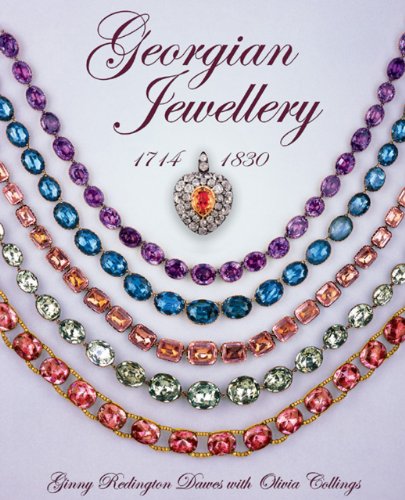 Georgian Jewellery is a celebration of the quality and style of the eighteenth century and of the endless ingenuity in design and workmanship that produced such a wealth of fabulous and wearable pieces of jewellery. Heavy academic tomes have already been written about the period, so this book illuminates the subject in a more colourful and accessible way. Much disparate information about the jewellery has been gathered together and the period is brought alive by portraits and character sketches of famous Georgians in their finery, fashion tips, gossip, and some rather outrageous cartoons of the time, as well as interesting newly discovered facts. Some might think that Georgian jewellery is the stuff of museums or safe-deposit boxes, but since many of the pieces pictured here have been on the market in the last few years, it is hoped this book will encourage people to realise this lovely jewellery is as beautiful an adornment today as it was over two hundred years ago. Information is given on how t

Ginny Redington Dawes, a life-long collector of antique jewellery, has written two previous books on the subject - 'The Bakelite Jewellery Book' and 'Victorian Jewellery'. Staff writer for MGM Screengems Music, she is also a successful composer; she wrote the book, music and lyrics for the off-Broadway show 'The Talk of the Town' and has won a CLEO award for music for advertising. Olivia Collings became fascinated by the seventeenth century alchemist and jeweller Christopher Pinchbeck at an early age and bought her first piece of antique jewellery aged seven. She trained in an exclusive Bond Street antique jewellery shop before starting her own business in 1975 and has continued learning about and dealing in Georgian jewellery ever since. She is now an independent jewellery consultant.

Book Description Acc Art Books. Hardcover. Condition: Very Good. 1851495398 Very Good in a Very Good dust jacket; Hardcover; Dust jacket is clean and intact with no tears, and has not been price-clipped (Now fitted with a new, Brodart jacket protector); Light wear to the boards; The textblock edges are unblemished; The endpapers and all text pages are clean and unmarked; The binding is excellent with a straight spine; This book will be stored and delivered in a sturdy cardboard box with foam padding; Large Format (11.75" - 12.75" tall); Light purple dust jacket with photo of necklaces, and title in dark red lettering; 2007, Acc Art Books; 200 pages; "Georgian Jewellery 1714-1830," by Ginny Redington. Seller Inventory # SKU-V05UA04006279

Book Description Acc Art Books, 2007. Condition: Good. A+ Customer service! Satisfaction Guaranteed! Book is in Used-Good condition. Pages and cover are clean and intact. Used items may not include supplementary materials such as CDs or access codes. May show signs of minor shelf wear and contain limited notes and highlighting. Seller Inventory # 1851495398-2-4

Book Description Hardback. Condition: Very Good. The book has been read, but is in excellent condition. Pages are intact and not marred by notes or highlighting. The spine remains undamaged. Seller Inventory # GOR007133964

Book Description Antique Collectors Club Dist 2007-10-22, 2007. Hardcover. Condition: Very Good. Item is in very good condition. If supplemental codes/CDs for textbooks are required please contact us prior to purchasing as they may be missing. Photos are stock pictures and not of the actual item. Seller Inventory # DS-1851495398-2