Items related to Gilgamesh : a new rendering in English verse 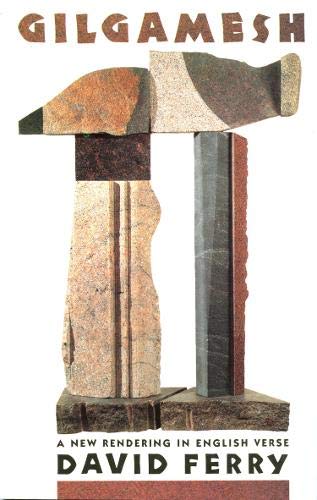 Review:
This is one of the more recent translations of the Babylonian Epic of Gilgamesh, about the hero-king of ancient Mesopotamia whose adventures--searching for eternal life, surviving a worldwide deluge in an ark filled with animals, to name a couple--make up one of oldest pieces of literature on record. David Ferry's version attempts to provide the most readable rendering of the epic, artfully finding a poetic voice that's particularly accessible to the modern ear, as well as working to smooth over the gaps in the poem caused by the fragmentary record of the original clay tablets.
About the Author:
David Ferry, a finalist for the National Book Critics Circle Award in Poetry for his translation of Gilgamesh in 1992, has translated The Odes of Horace, The Eclogues of Virgil, and the Epistles of Horace. For Of No Country I Know: New and Selected Poems and Translations he won the Lenore Marshall Poetry Prize, given by the Academy of American Poets, and the Rebekah Johnson Bobbitt National Prize for Poetry, given by the Library of Congress. In 2001 he received an Award in Literature from the American Academy of Arts and Letters, and in 2002 he won the Harold Morton Landon Translation Award. He is the Sophie Chantal Hart Professor of English Emeritus at Wellesley College.

Book Description Condition: Good. Your purchase helps support Sri Lankan Children's Charity 'The Rainbow Centre'. Ex-library, so some stamps and wear, but in good overall condition. Our donations to The Rainbow Centre have helped provide an education and a safe haven to hundreds of children who live in appalling conditions. Seller Inventory # Z1-S-005-03930

Shipping: US$ 13.21
From United Kingdom to U.S.A.
Destination, rates & speeds

Book Description Condition: Good. This is an ex-library book and may have the usual library/used-book markings inside.This book has soft covers. In good all round condition. Please note the Image in this listing is a stock photo and may not match the covers of the actual item,250grams, ISBN:9781852242275. Seller Inventory # 9165807

Shipping: US$ 14.81
From United Kingdom to U.S.A.
Destination, rates & speeds

Shipping: US$ 22.28
From United Kingdom to U.S.A.
Destination, rates & speeds