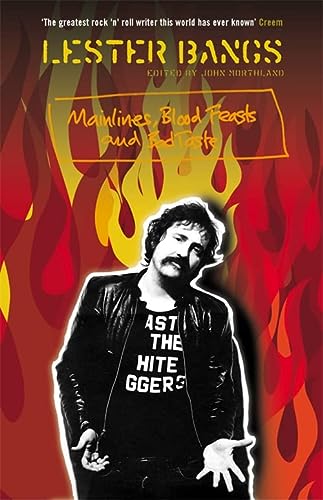 Lester Bangs was for many the most intelligent and influential critic of rock and roll. This companion to Psychotic Reactions and Carburetor Dung compiles fifty-four of Bangs' pieces. It is suitable for those interested in the history of rock and roll.

Lester Bangs started out as a record reviewer for Rolling Stone, went on to write for and then edit the magazine Creem, before moving to New York and covering the burgeoning punk scene, writing in daily newspapers and the Village Voice. Bangs died suddenly at the age of 33 in 1982. A biography of Lester Bangs, Let it Blurt was published in 2001.

?It?s full of the most insightful, passionate and keenly felt writing about music I?ve ever seen? Independent on Sunday ?No other rock writer can touch him for the sheer physical trip of his prose? Telegraph ?To read Bangs at his inconsistent best is to be subsumed into a tidal wave of passionate love and hate, joy and rage; a dazzling linguistic flood which approaches the improvisatory transcendence of a John Coltrane? Independent ?The core of the book is Bangs? wrestling with the loss of feeling and commitment that becomes increasingly apparent as the ?70s come to a close? Rock writing at its bravest? Books of the Year, Uncut ?This is an absorbing second collection? Bangs wrote fast and died young. Tell those transition year kids who say they want to be music writers to read this and then consider accountancy? Evening Herald ?Lester Bangs was arguably the most intelligent and influential rock critic of all time. He turned bad taste into an art form? opinionated, witty, rude, acerbic? What?s On in London ?Bangs, with his scabrous, funny and oddly elegant prose, was among the very best? Financial Times ?Any writer could learn from Bangs?s energetic imagination in terms of imagery, phrasing and frame of reference? Mojo ?A collection of the best writing from a man who basically invented modern rock journalism... Containing his teenage autobiographical writing as well as the best of his music criticism and essays, it?s a fast and furious read? Sunday Tribune (Dublin) ?Bangs was irresistibly irreverent, hyperbolic and honest, the everyman with a pen? Hot Press ?Fiercely passionate, heroically hedonistic and endlessly inventive, Lester Bangs towered over ?70s/early ?80s rock journalism like a handlebar moustachioed colossus ... Bangs was as much a chronicler of the changing social climate as he was of musical trends. Frequently funny, often dazzling and shot through with dangerous, rock?n?roll attitude, Mainlines... is a testament to a talent that all too briefly burned as brightly as the sun? Jockey Slut ?Bangs hit top form with demolitions of the likes of Emerson, Lake and Palmer and some expressive travel pieces that reveal his unique class as a writer... Bangs?s writing boasts vision, passion, style and, above all, truth? Q Magazine ?He was as astute and intelligent as he was entertaining... chemical genius? Maxim ?One of America?s best cultural commentators? Infuriating and engrossing? Choice Magazine ?Those who refuted the notion that a mere music journalist could be crowned the US literary king were usually unfamiliar with his fearless, white-knuckle, death of glory, arse-kicking prose? Westminster Times ?Bangs, who in this very book, maintains the startling ability to convince you beyond the grave that Black Sabbath were nothing less than the John Milton of rock. Genius!? Nude Magazine ?Just flick to a random page and you?re instantly transported into a mind sharp and fluid enough to cut through all those million hacks and their pick?n?mix boxes of assorted adjectives. If you care about rock?n?roll, buy this? Buzz Still a byword for rock writing at its most unrestrained and passionate... his two posthumous anthologies... attest to his brilliance -- John Harris * Guardian *