Items related to Into the Quick of Life: The Rwandan Genocide - The...

Hatzfeld, Jean Into the Quick of Life: The Rwandan Genocide - The Survivors Speak

Into the Quick of Life: The Rwandan Genocide - The Survivors Speak 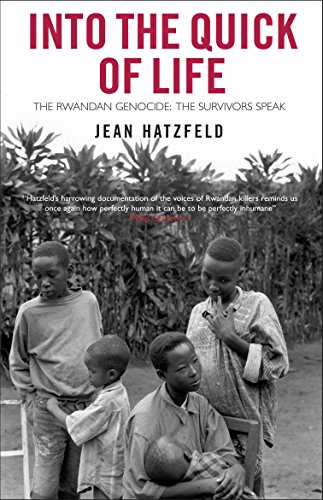 Five out of six Tutsis were hacked to death with machetes and spears by their Hutu neighbours. In the villages of Nyamata and N'tarama, where, in the first two days of the genocide, over 10,000 Tutsis were massacred in the churches where they sought refuge, Jean Hatzfeld interviewed some of the survivors. Of all ages, coming from different walks of life, from orphan teenage farmers to the local social worker, fourteen survivors talk of the genocide, the death of family and friends in the church and in the marshes of Bugesera to which they fled. They also talk of their present life and try to explain and understand the reasons behind the extermination. These horrific accounts of life at the very edge contrast with Hatzfeld's own sensitive and vivid descriptions of Rwanda's villages and countryside in peacetime. Into the quick of life brings us, in the author's own words, as close to the event as we can ever get.

Born in Madagascar in1949, novelist and journalist Jean Hatzfeld worked for several years as foreign correspondent for French daily newspaper Lib ration, covering both the conflict in Yugoslavia, where he was wounded by machine-gun fire in 1992, and the Rwandan genocide. He lives in Paris. 45

1. Into the Quick of Life: The Rwandan Genocide - The Survivors Speak

Book Description Paperback. Condition: Very Good. The book has been read, but is in excellent condition. Pages are intact and not marred by notes or highlighting. The spine remains undamaged. Seller Inventory # GOR003381222

2. Into the Quick of Life : The Rwandan Genocide - The Survivors Speak