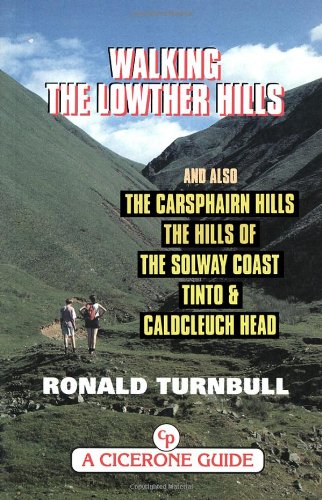 A guide to walking in southern Scotland's Lowther Hills and also the Carsphairn Hills, the hills of the Solway coast, Tinto and Cauldcleuch Head. The Lowther Hills offer high rounded ridges: windswept, sheep-nibbled and solitary. However the tops are only part of the story. Careful exploration discovers the small hidden valleys, the ?cleuchs' and ?linns' that give this range its particular character. Here you may meet a wild goat, or find yourself involved with a small waterfall and a couple of feet of rockclimbing. Along the Solway coast are granite hills, with all the ruggedness of the Cairngorms but hardly any of the height. Rocky-topped Criffel, Screel and Cairnsmore of Fleet contrast nicely with the steep-sided grassy hills inland, and with the gorse and beaches of the Solway coast. These 50 walks cover all the hills west of the M74 except the Merrick and Rhinns of Kells. In case of bad weather there are also a few woodland and coastal walks.

Ronal Turnball has written a number of guidebooks for Cicerone Press. His recent books include The Book of the Bivvy, and walking/scrambling guides The Cairngorms and Ben Nevis & Glen Coe, as well as Three Peaks Ten Tors - a slightly squint-eyed look at various UK challenge walks. He has a regular column in Lakeland Walker and also writes in Trail, Cumbria and TGO (The Great Outdoors). Ronald has won the Outdoor Writers and Photographers Guild award for excellence six times. In 1995 he won the Fell Running Association's Long-distance Trophy for a non-stop run over all the 2000ft hills of Southern Scotland. He enjoys multi-day treks, through the Highlands in particular, and has made 18 different coast-to-coast crossings of the UK.

Book Description Paperback. Condition: Good. The book has been read but remains in clean condition. All pages are intact and the cover is intact. Some minor wear to the spine. Seller Inventory # GOR004560855

Book Description Paperback. Condition: Very Good. The book has been read, but is in excellent condition. Pages are intact and not marred by notes or highlighting. The spine remains undamaged. Seller Inventory # GOR001906487